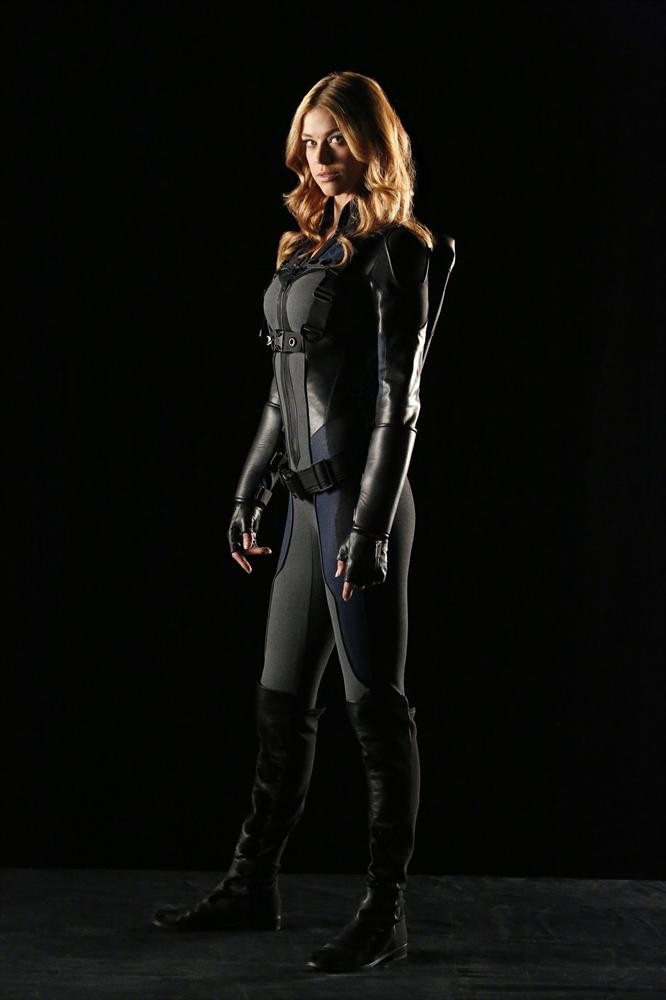 It’s hard to imagine how truly terrible, no-good, very bad television the unreleased 2011 Wonder Woman project headed by David E. Kelly must have been, because Adrianne Palicki (Friday Night Lights, About a Boy, Supernatural) is a freaking awesome superhero and just about perfect in almost every way. What did you do, David? What did you do?Â

Palicki, of course, showed up in this week’s Agents of S.H.I.E.L.D as Bobbi Morse: Agent of SHIELD, undercover plant in Hydra, Simmons’ saviour and everybody’s new girl-crush. Jemma was practically swooning after being rescued by Morse from Hydra after her cover was blown. Swooning. You’re right, Simmons: she is amazing, with the mastery of those batons and a jump onto an invisible plane that did not go unnoticed. Palicki would have made an awesome Wonder Woman, given the right time and place. Lucky for SHIELD the TV show, that the other TV show didn’t quite work out, because these agents of SHIELD need Bobbi Morse.

Right now, Bobbi is completely happy to be the newest member of Director Phil Coulson’s skeleton crew, and I, for one, could not be happier to see someone kick ass who isn’t Melinda May. Not that I don’t love May (we all do. Because we’re terrified of her), but because May can’t hold everyone off forever by herself. It must get exhausting for her, and I know it’s exhausting for an audience to have to depend on the same character all the time for salvation. I know Skye is supposed to be this effective field agent now, but I still don’t buy it. Her attitude is wrong; her hair is wrong. She’s wrong. Just give her back her computers and let her hack her way through this series.Â

Skye right now is having a terrible, awful, no-good, very bad day. She starts off by learning that, because she hasn’t freaked out from the alien DNA coursing through her veins, she could very well be an alien (Thor’s an alien, so it’s not so bad, really). She then transitions to learning that Coulson has carved those symbols into his desk and that scares her a lot, because she loves Coulson and doesn’t want him to go completely insane like John Garret (Bill Paxton,Â Big Love, The Hatfields and McCoys). And finally, the cherry on the sundae of her day, little Skye discovers her father (Kyle MacLachlan) is a vicious murderer who wants her back in the family fold. She has had herself a day.

Luckily, Skye’s got her SHIELD Dad to keep her upright. I’m kind of glad her relationship with Coulson regained a sort of even keel this week. Not that I’m Skye’s biggest fan (I am so not), but I am a fan of Coulson, and his sweetness with a crying Skye, the girl who had just had herself a day, was wonderful. When your heart is broken, why *wouldn’t you just want someone strong, who you trust and care for, to hold you and let you believe everything is going to work out? It makes me think back to Battlestar Galactica and Admiral William Adama (Edward James Olmos) sitting back and softly, but firmly and confidently, saying, “Everything’s going to be all right…”. When Adama says it, and when Couslon implies it, I believe it. I want either Bill Adama or Phil Coulson to call me every night before I go to sleep, and tell me how everything is going to be ok. I might sleep better.Â

It’s interesting how the past few episodes have depicted Coulson as being all things to all his people. He’s very paternal with the undercover Simmons, bringing her groceries, making her dinner and gently chastising her for the lack of anything edible in her fridge. He’s connected to May in a way nobody else could understand, but he means so much to her she’s vowed to take care of him no matter what happens (“Everything’s going to be all right…”) and this week he’s back to being Skye’s de facto dad, soothing her when she cries and allowing her to break down, so she can build herself back up again. I’m afraid the showrunners are making us aware of how much he means to everyone so when they destroy him, it will destroy us. Don’t do that, show. I need to believe everything’s going to be all right.

Next Week: Skye needs to turn to Ward (and his facial hair of regret) for help. Good luck with that.