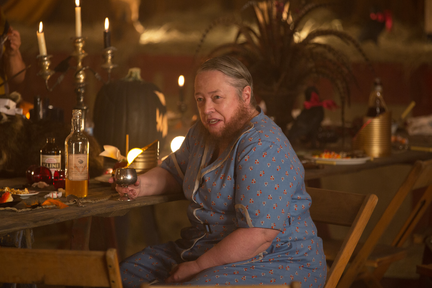 You know something wicked this way comes when the freaks are scared to come out and play. On this week’s episode of American Horror Story: Freak Show, we were introduced to the legend that is Edward Mordrake, and he’s surprisingly…nice.

Well, as nice as a murderous ghost from hell can be. Let’s back up a bit before we get to the man in black. Early on in the episode, Ethel gets a terrible diagnosis that she has less than a year to live due to cirrhosis of the liver. I found it sad that instead of listening to the kindly doctor, she turned back to the bottle. However, this led her to reveal the legend of Edward Mordrake to the Tattler sisters when they asked why no freaks performed on Halloween. This whole sequence was heavily influenced by the German silent film, The Cabinet of Dr. Caligari, and I loved it. It was moody and creepy just like I like my urban legends to be. Mordrake was an artisocrat with a devilish second face on the back of his head whispering evil nothings to him. After joining a freakshow, he went mad and murdered every freak before killing himself.

Well, of course this means that no freak performs on Halloween for fear that Mordrake will be summoned and take someone back to hell with him. Sadly for some unfortunate soul, Elsa had to get wrapped up in her own warped reality and perform “Gods and Monsters” by Lana Del Ray. Guess who showed up for the performance. Yep, Mordrake himself. However, Mordrake isn’t here to see Elsa (for now!). Instead, he goes to Ethel where he tells her she must confess her deepest pain before he decides who to bring back to hell. This whole sequence was so heartbreaking. Her history with Del was one of exploitation and manipulation. Surprisingly, Mordrake was kind to her and hushed the vile things his second face was telling him. And they say chivalry is dead.

Thankfully, Ethel is not “the one”, but the question for next week’s episode is who is the one? I hope it’s Del, which probably means that it won’t be. I know his scene with Ethel where she told him she was dying was supposed to make us soften toward him, but he’s still terrible. When he couldn’t “perform” for Desiree, he had a brief moment of physical violence that he couldn’t seem to control. This also leads me to be skeptical about his sexuality. They’ve heavily hinted that Desiree has an extra appendage downstairs, and Ethel has always had a beard. Just saying there might be something going there.

Someone with an especially long appendage is newcomer Stanley (Denis O’Hare). He and Maggie (Emma Roberts) are con artists trying to obtain something (or someone) authentic from the freakshow in order to sell to the American Morbidity Museum. Maggie infiltrates the freakshow by claiming to be Miss Esmeralda, a fortune teller. I’m not surprised Maggie was able to con Elsa so easily. Elsa is so determined to become a star that she’ll believe anything.

Con artists are clever. They know all it takes is to gather a few bits of personal information, and then they can spin that information to manipulate. It just so happens that Maggie’s premonition of a handsome Svengali came true. Unfortunately, it will likely cause someone’s untimely death. While Maggie was doing all the work, Stanley was getting some one on one time with a naked Thor. If Thor’s reaction to his nether-regions is any indication, Stanley could probably find work at the freakshow too.

Maggie’s appearance doesn’t bode well for Dot’s chances with Jimmy. Like there was any doubt Jimmy would be instantly attracted to Maggie. Dot’s line, “I’m sure that’s not the only thing you give away for free” was hilarious. Dot has quickly turned into quite the little terror. She’s conceited and unapologetic to Bette for having dreams where one of them dies so the other can live. Last week I thought Bette was going to be manipulated by Elsa into hating her sister, but it would seem there will be no manipulation needed.

Finally, we can’t forget our favorite spoiled psychopath! Dandy was furious at his Howdy Doody costume and threatened Dora, the maid. Patti LaBelle be hella sassy, but it will no doubt get her killed. Dandy eventually makes his own clown costime and goes to terrorize Corey and Bonnie in the bus. Meanwhile, Twisty was being his usual creepy self by standing behind bushes watching little kids trick or treat. I was getting some serious John Carpenter’s Halloween vibes from these scenes. The shots of him lurking in the distance was just like Michael Meyers, and it gave me the heebie geebies.

– Will Maggie fall for Jimmy and decide she can’t go through with Stanley’s plans?

– Will Mordrake try to take Elsa to hell with him?

– Will either Dot or Bette conspire to kill the other one?

– How long before Twisty gets annoyed with Dandy just like the rest of us?

Z Nation Preview: "Welcome To The FU-Bar" [VIDEO and PHOTOS]

Once Upon a Time “Her Handsome Hero”