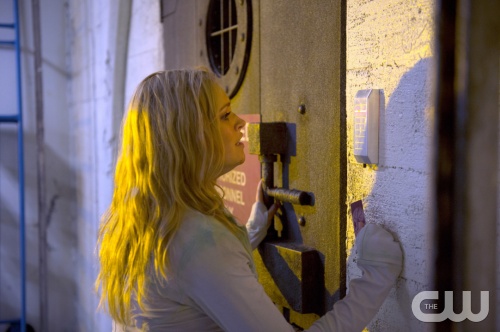 The CW’s hit series The 100 is back. Let the obsession begin again.

Synopsis for “The 48”: Season Two begins in a dangerous new world. Raymond J. Barry guest stars in the episode. Picking up where the season one finale ended, Clarke (Eliza Taylor) is still alone in the white room, frantically trying to make sense of her bizarre surroundings, while the fate of Bellamy (Bob Morley), Finn (Thomas McDonnell) and Raven (Lindsey Morgan) is still unknown. Lincoln (Ricky Whittle) and Octavia’s (Marie Avgeropoulos) daring plan is thwarted and an enemy returns. Meanwhile, Abby (Paige Turco), Kane (Henry Ian Cusick) and the survivors of the Ark must face physical and moral dilemmas in their dangerous and beautiful new world. Finally, Jaha (Isaiah Washington) makes a heroic decision. Devon Bostick and Chris Larkin also star.

We’ve seen and loved the premiere. We’re not going to say much else other than this Mount Weather location is going to provide lots of drama. Clarke continues to be badass as well as the skeptical and jaded person that she is. And that’s a good thing, we think. Mount Weather is a surprising and mysterious place and we’re going to enjoy finding out what’s really going on there. It can’t be anything good. As for on the ground, Lincoln and Octavia are trying to survive. Octavia’s hurt so you know Lincoln will try to do anything to save her. We don’t want to give too much away so that’s all we’re going to say.

However, we did catch up with the show’s EP Jason Rothenberg as well as members of the cast over the summer at Comic-Con. Here’s what they all have to say about season two:

No video for Ricky Whittle, unfortunately, but we were able to talk to him aboutÂ season two.

RICKY WHITTLE: “Lincoln and Octavia are on their own in the forest. They are abandoned. They are on their own. Octavia has an arrow in her leg. From season one, we remember that injuries aren’t quite as they seem. They’re not that simple. And so things are going to get complicated very quickly. So from the off, we’re gonna learn a little bit more about the world. And a little bit more about the two’s relationship. Something bad is probably gonna happen. And then for the whole season, it’s just gonna get darker. They’re really going to be put through their paces. Lincoln’s always been a moral compass. He’s always been a good guy. He’s gonna be challenged in season two. He’s gonna go through some very bad times. I’ve been pitched a story by [creator] Jason Rothenberg and our writers that I’m gonna have to go home. I’m gonna have to study, research and really do my homework because the material they’ve given me is gonna be very dark. It something I’ve never done before. And it’s something I want to really give a hundred and ten percent to it. It’s nice when producers and writers trust you with such material and I feel honored and challenged. That’s what you want as an actor. You want to be challenged. The storylines for season two are very dark. Darker than season one where 12 year olds are jumping off cliffs and kids are getting stabbed or are torturing innocent people. That’s Disney Land. Season two is darker and that’s just three episodes into the story that I’ve been pitched. So I already know that season two is bringing it, you know? After the finale it’s kind of where do you go from here? They answered it. They’ve answered it. It gets dark straight away. So it’s nice to be challenged and I’m looking forward to it.”

He also talked about becoming a series regular

RICKY: “Obviously that’s an honor. It’s an honor to be a part of this show. An Emmy-nominated show in its first season. But it doesn’t keep you safe. I think we saw last year, just because you’re a series regular you can be gone. You can be gone at any time! And that’s gonna be true this season. Nobody is safe. And I doubt everyone’s gonna survive. But on a personal level, it really is a blessing and honor and like I say, to be part of a show I would watch anyway if I wasn’t in and to be a character that I would choose if I wasn’t in this show…I watch it and go ‘I want to be Lincoln in The 100.’ Because he’s exciting. He’s different. He’s a warrior. He doesn’t speak. He’s got this mystique where the unspoken word is stronger than any dialogue. Speaking of dialogue, he’s got this whole Grounder language that’s gonna be in season two. So there’s a lot of strings to the boat. There’s a lot of layers and it’s exciting. I’m looking forward to really bringing it in the second season.”

The Blacklist "The Front"