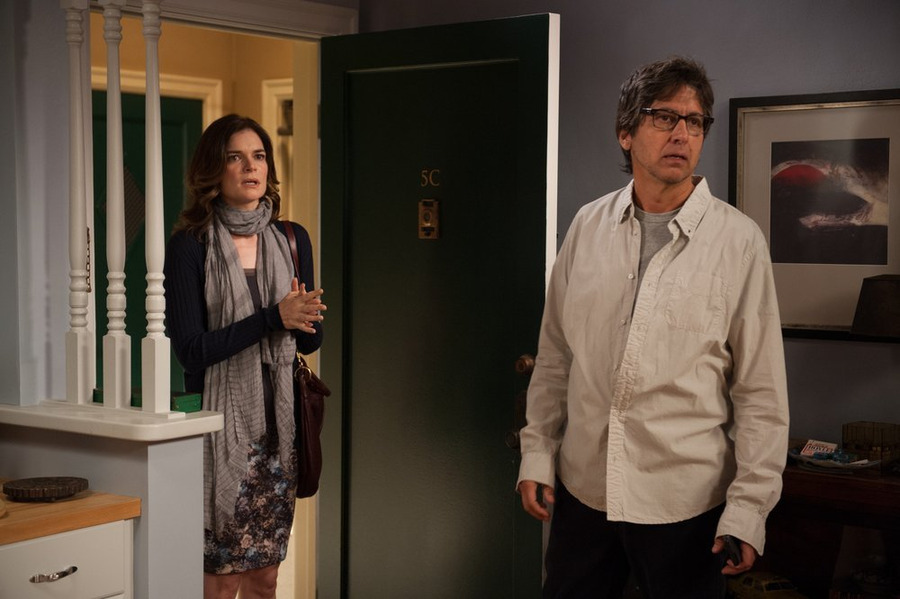 I have been Team Hank for a long time. Maybe ever since he first showed up on Parenthood. I realize there are many fans who might disagree, and who donâ€™t think the pairing works very well at all. But I think Hank and Sarah are fantastic together.

While a lot happened in this weekâ€™s episode, one of the more significant storylines this week focused on Sarah and Hank.

In last weekâ€™s episode, Hankâ€™s ex-wife laid down some ground rules regarding their teenage daughter, Ruby. She insisted that she moved back so that Ruby could spend more time with Hank, not with Hankâ€™s girlfriend. Clearly, Sandy has been used to steamrolling over Hank, and he simply agreed without any further conversation.

When Hank wakes Sarah up early and tries to get her out of the house before Sandy arrives with Ruby, itâ€™s clear that he has yet to have this conversation with Sarah. So when Sarah unknowingly comes out of the bedroom wearing nothing but Hankâ€™s button down shirt (is anyone else having a Gilmore Girls flashback?) Sandy is pretty upset.

The problem is that Sandy has the wrong idea about Sarah and her relationship with Hank. She doesnâ€™t understand that itâ€™s more than a fling, and that Sarah is more than â€œHankâ€™s assistant.â€ Hank admits to Sarah that he just doesnâ€™t know how to talk to Sandy. Itâ€™s clear that sheâ€™s been calling the shots for a long time.

So to finally see Hank stand up to her was incredibly satisfying. Especially when itâ€™s obvious how hard this is for him to do. He canâ€™t even handle ordering food or letting her talk first. He simply has to say what he has planned to say before anything can derail him. Sandy is taken aback when Hank wonâ€™t let her speak first, and it seems this is one of the first times sheâ€™s ever really listened to him. Hank tells her the relationship with Sarah is serious, and that he wants Sarah to be a part of Rubyâ€™s life. Thank goodness Sandy turns out to be a reasonable human being and says, â€œokay.â€

The larger story this season, though, is all about Zeek. In this episode, he comes home from the hospital after having open-heart surgery, and he struggles with his recovery. Thereâ€™s a shot right at the beginning when Camille takes Zeekâ€™s arm to help him walk toward the house, and for just a second we see his point of view â€” a slow, labored shot of the long path leading up to several stairs. It looks difficult and exhausting, and Zeekâ€™s pride seems to be suffering more than anything else.

When he gets inside, he sees that a bed has been made for him in the leaving room so he wonâ€™t have to up and down the stairs. Camille even brings out a gold bell that he can ring whenever he needs help, but that only hurts him more. And when all wants to do is go to the bathroom on his own, he becomes both depressed and enraged that his wife has to help him.

Camille becomes afraid that Zeek is giving up altogether. Rather than trying to regain his strength, all he wants to do is watch John Wayne movies. As we might expect, the kids take turns trying to motivate him in their own ways, but nothing seems to work.

It is finally his daughter-in-law who convinces him to try. As a cancer survivor, Kristina can identify with Zeekâ€™s feelings. She is pretty blunt when she tells him how much people pissed her off when she was sick. No one wants to feel pitied or helpless or like they are a burden on their family, and she gets it. Reluctantly, Zeek agrees and asks Kristina to help him stand.

As for the rest of the family, it looks like Crosby is going off the deep end, so I hope we get into that soon. Julia and Joel continue to struggle and have to have a talk with Sidney about the fact that they may not get back together. And Max likes a girl! I am crossing my fingers that Max gets to have a girlfriend this season.

The final season of Parenthood airs Thursdays at 10/9c on NBC.

Survivor’s Remorse: “The Thank You Note”