Hallmark Movies & Mysteries formally launches the new network Sunday night with Along Came a Nanny, a twisty fun, family-friendly mystery about a detective chasing a promotion who goes undercover as a manny to find out who’s behind a string of burglaries in a wealthy suburban neighborhood.

Cameron Mathison and Sarah Lancaster headline, and the Vancouver-filmed movie boasts a ton of familiar faces, including Motive‘s Brendan Penny, who’s also on UP TV tomorrow night in Heavenly Match. 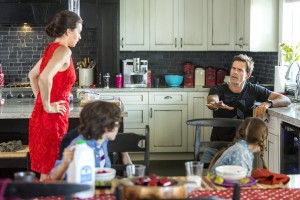 Here’s the formal logline: When an upscale neighborhood is hit by a string of robberies, an undercover cop poses as a nanny to investigate the crimes and finds himself bonding with the children in his care and falling for a beautiful fellow nanny.

Mathison is super-game for anything the kids throw at him, and it’s fun to watch him try to blend in with the family and his fellow nannies while still conducting an investigation. There are a few red herrings here and there, to suit the new brand. It’s a good companion to Garage Sale Mystery, which y’all know I love.

And here’s a sneak peek. We chatted with screenwriter Gary Goldstein about the film, and you can read that interview here. Along Came a Nanny airs Sunday night at 9/8c on Hallmark Movies & Mysteries. Here’s a sneak peek.