Hallmark Channel has a history of food-themed romances (A Taste of Romance, Uncorked, and Just Desserts), and they carry on the tradition this weekend with the supremely charming Recipe For Love, starring Danielle Panabaker andÂ Shawn Roberts as a budding chef and celebrity chef thrown together when she’s assigned to help him finish a cookbook.Â  In the process she, and we,Â learn that his swagger hides a pretty good guy.

I enjoyed the heck out of this film. I love that we find out pretty early in the proceedings that Dexter (Roberts) is a lot of bark but not a lot of bite, and that Lauren (Panabaker) sticks with him both because there’sÂ a professional reward in the mix if she helps him succeed, and a personal one, too.

There are several gem moments throughout, and the casting is superb. Panabaker is very good as a young woman who’s been so laser-focused on a life plan held since childhood that she almost can’t get out of her own way when other opportunities present themselves. And Roberts, who’s recognizable for appearances in several Canadian-filmed TV and film projects, and was in the cast of Hallmark’s The Music Teacher, just nails it. You really do actually see him just take off the TV persona and reveal the shy, scared kid underneath.

You’ll also recognize Pascale Hutton from When Calls the Heart and her recent appearance in the season premiere of Once Upon a Time. Peter DeLuise, who works primarily now as a successful director based in Canada (he’s helming the Garage Sale Mystery franchise) pops in as the MC for the cooking competition. I highly recommend it. It’s very, very sweet, and aside from a couple of slight threats to derail the plot, everybody in it is just a decent person, which is really nice to watch. 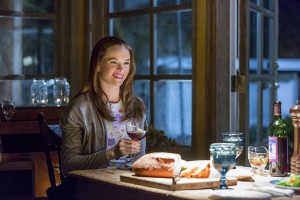 Here’s the formal logline: An earnest, culinary school hopeful, clashes with a big shot celebrity chef when she is assigned to ghostwrite his cookbook. As they struggle to get through each recipe together, their mismatched cooking styles and misunderstood pasts threaten to send the cookbook up in flames. But after they both dig deeper into the heart of their shared passion, a romance becomes more likely to spark.

Recipe For Love airs at 9/8c Saturday night and Sunday night on Hallmark Channel. You can check out our exclusive interview with Danielle Panabaker here. Here’s a sneak peek of the film.