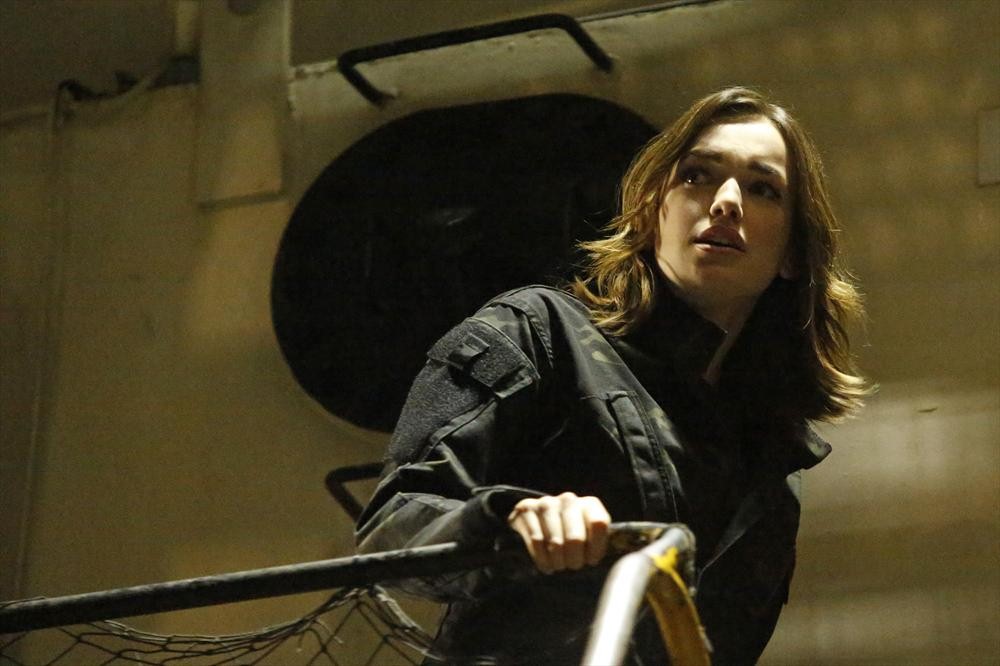 Previously, on Agents of S.H.I.E.L.D.: Everything has gone to Hell in a handbasket. Skye (Chloe Bennet) is now a field agent for God’s sake. If that doesn’t tell you how desperate SHIELD is for warm bodies, nothing else will.

While I’ll be the first to admit that last season I said there needed to be some changes because the show wasn’t really working for me, Skye with guns is not what I had in mind. I am not buying her stone-cold demeanor and lack of physical reaction to any of the bullshit going on around her at all. It’s actually pissing me off a bit.Â While I understand the New World Order of having Hydra hunt down and turn or kill all the SHIELD agents they can find necessitates everyone re-evaluating their roles and pulling their weight in ways other than what their original job-descriptions entailed, but Skye? As Agent Melinda May 2.0? I just don’t see it.

Yes, Coulson (Clark Gregg) has said everyone has had to change and adapt to their new situations, but I’m still not buying it. Maybe it’s the bangs. Bangs are not what you want in the field. As someone who has literally worked in many a field (baling and loading hay, rounding up horses, running the tractor, picking rocks) I can tell you that bangs are the last thing you want when you’re doing, hot, sweaty work, which I assume chasing and shooting villains to be. They get sweaty, they get in your eyes, they block your vision and you inevitably end up just wrapping your hair in a twisted handkerchief to keep it off your face. But I digress.

This week’s episode title, “Making Friends and Influencing People,” refers to Simmons (Elizabeth Henstridge) who is working undercover as a low-level lab tech for Hydra. Coulson, after making her dinner (which just endeared the man to me even more), tells Jemma she has to make friends at Hydra; it’s the only way she’ll fit in and succeed at her mission (Mission of what? Most adorable laboratory break and enter?).

This puts Jemma in the uncomfortable position of realizing she has to be like Ward (Brett Dalton), who betrayed them all and sent Fitz (Iain De Caestecker) and Simmons to what should have been their doom at the bottom of the ocean. Even though Coulson assures her it’s not the same thing at all, it totally is. He’s asking her to work her way into people’s lives, gain their trust and affection, and all with the knowledge she’s going to end up throwing them under the bus (literally and figuratively).

Yes, Hydra is evil and needs to be stopped, but her lab supervisor seems like a nice enough guy who’s probably just some dude whose circumstances went beyond his control. Not everyone working for Hydra is the blood enemy of decency and the common good. Some of them are just lower-level joes trying to earn a paycheck, and it’s those people Coulson is asking Jemma to knowingly influence and betray.Â

While real-world Simmons is proving her worth to Hydra, imaginary Simmons seems to have lost her influence over Fitz to some degree. While arguing about going to see Skye’s “assett” (Ward), Fitz finally acknowledges that subconscious Simmons isn’t actually present. “You’re not there,” he tells her, and she vanishes. It simultaneously made me happy and sad.Â

I’m glad Fitz is improving, and the broken parts of himself are coming back together (for that we can thank new team member, Mac (Henry Simmons) who has taken on the responsibility of wrangling Fitz) but I’m sad to see my twins separated, for any reason. The sooner they’re back together, confounding me with their Seussian twin-speak, the better.Â

Their reunion is probably a long-way off, what with Simmons now making her way up the Hydra corporate ladder thanks to her “saving” Whitehall (Reed Diamond, Franklin and Bash,Â The Mentalist, Dollhouse) from Skye’s bullet while trying to re-obtain asset Donnie Gill (Dylan Minnette, Scandal, Lost, Prison Break), the kid from season one who can turn things to ice.

Jemma’s rise in Hydra, literal and figurative (upstairs is scary. Very scary) may seem exactly what Coulson wanted, but I wonder if he knows the very clear and present danger he’s put her in. That re-training they put ex-SHIELD operatives through is brutal, and permanent. Next time Coulson shows up for an impromptu dinner, I hope he has something better than kale to offer her. If it’s possibly Jemma’s last meal as a free-minded woman, she deserves better than that.

How to Get Away with Murder “Smile, or Go to Jail”

The Fashion Fund “Cocktails With the Committee”