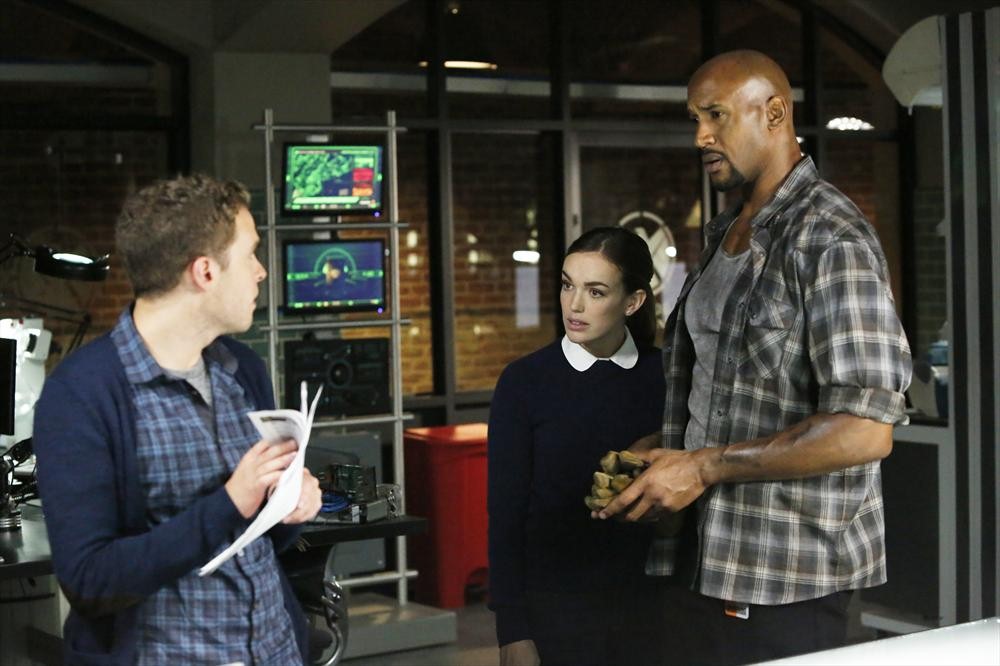 I’m not entirely sure what the title of this week’s Agents of S.H.I.E.L.D episode is referring to. Which head is heavy? Carl Creel’s (Brian Patrick Wade, The Big Bang Theory) because it can turn into any material? Phil Coulson’s (Clark Gregg) because of all his responsibilities and the fact his head is full of those crazy alien markings he’s been carving into the walls? Lance Hunter’s (Nick Blood, The Bletchley Circle) head because he’s got so many contradicting plots up there and he’s double-crossing everybody? That must weigh a body down. I just don’t know…

This week’s episode basically starts out with a vehicular chase scene, of which I heartily approve. May (Ming-Na Wen) is on a stolen Harley, running down Creel in a stolen pick-up and she is pissed because she’s just left behind a trapped Hunter and two dead bodies. Good. May should get pissed more often, then there would be more action scenes in this show and less introspective discussion. We like car chases, fighting and explosions. If we wanted talking, we would watch Dr. Phil.

The necessity of Hunter, as a team-member, kind of befuddles me. It took an entire season for our team to come together and gel as a cohesive unit, adding two or three new characters seems kind of risky. Tripp (B.J. Britt) at least had a few episodes last season to work his way into the team, but Hunter was just thrust upon us and I don’t know if he works.

There was no tension or real investment in Hunter’s storyline this week; we know going in that even if he did hand Coulson over to Talbot (Adrian Pasdar), that Coulson would be fine or he would come back within minutes. Otherwise, this season would come to a screeching halt before it even got started. The only really worthwhile part of the entire Hunter story was Tripp’s reaction to getting iced when he turned and spied Hunter with the night-night gun, “Aww, Hell, no…” Adorable. Tripp can stay.

Speaking of characters that can stay, ‘Mac’ Mackenzie (Henry Simmons, Ravenswood, Man Up, NYPD Blue) can become a permanent fixture as long as he keeps helping my Fitz (Iain De Caestecker), who is still talking to a Simmons (Elizabeth Henstridge) who isn’t there, and who abandoned them all, according to Skye. Fitz is clinging to his work, and his lack of ability to form a coherent sentence about the cloaking device Coulson wants reverse-engineered from the stolen Quinjet demonstrates how damaged he is. Mac reaches out to him, and asks for help that he really doesn’t need in order to make Fitz feel involved and needed, and that just bought Mac another day on this show as far as I’m concerned.

The part of Fitz’s brain that is Simmons encourages Fitz to talk to Mac, saying she likes him, that he’s honest and doesn’t talk to Fitz like the others. Fitz recognizes these things in Mac, but needs ‘Simmons’ to tell him. Simmons is like the good angel on Fitz’s shoulder, helping him work out what he already knows. He’s not just suffering brain damage; he’s suffering. He’s heart-broken and confused and mostly, he’s grieving. Having Mac as a friend and someone to work with will not only help him distance himself from his dependence on Simmons, it will let Â him start to heal.

This is evidenced when Mac helps Fitz realize he’s already got the information he needs, combined with Creel’s DNA results, to develop a way to stop and contain him. The best thing for Fitz right now is to know he’s still useful, still contributing and still a member of the team.

Having a few new members isn’t the only thing that’s changed with the team; Skye has realized Coulson is different, he’s hiding something from her and worries something is “wrong.”

I don’t know if it’s “wrong” per se, but it’s definitely different. After nothing last week, Coulson again goes all music of the universe, carving his intricate patterns in clay on the wall of his office. They almost look like crop circles.

There’s an odd beauty to his work, whatever it all means. There’s a symmetry and form that’s appealing to the eye; a repetitive pattern in simple geometric shapes that’s quite lovely. It could be language, it could be blueprints, it could be code. It could be anything.

What it definitely is, is showing up on the Obelisk that Raina (Ruth Negga, 12 Years a Slave) has brought mystery man Kyle MacLachlan (Desperate Housewives, Twin Peaks). It lights up like a Christmas tree when she touches it. Bonus for Raina: It didn’t kill her. Now, she has to bring Mystery Man his daughter, Skye. I bet Skye doesn’t go quietly. Quote from Mr. Tobey: “They’re setting something up.” ACE reporting, Mr. Tobey. Just aces.

Next Week: I refuse to believe Simmons joined Hydra. You’ve done many heinous things to me over the years, Whedon, many, many, many things. But I will not accept this. I. Will. Not.

The Knick Preview: "Working Late a Lot" [VIDEO and PHOTOS]

What They Said: Favorite Quotes from The Vampire Diaries "I'll Remember"

We Need to Know: What is the Crowes’ End Game on Justified? [VIDEO]