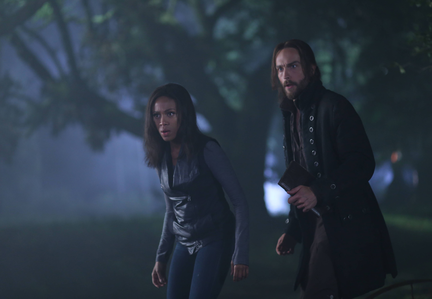 It appears battling two Horsemen of the Apocalypse isnâ€™t enough of a challenge for our favorite witnesses. Better throw a hard-nosed new sheriff into the mix. Sleepy Hollow met the new sheriff in â€œThe Kindred,â€ House of Cards alum Sakina Jaffrey as Sheriff Leena Reyes.Â Sheâ€™s got an edge and a mission to bring â€œsanity back to Sleepy Hollow.â€ Hmmâ€¦.good luck with that one.Â  Sheriff Reyes doesnâ€™t waste any time laying down the law. While exploring the archives, aka Crane and Abbieâ€™s lair, she throws Jenny in jail for weapons and puts Ichabod on high alert.Â As if they donâ€™t have enough to deal with alreadyâ€¦

The introduction of Sheriff Reyes did bring back one familiar face we had been missing, Frank Irving. About time we got back to whatâ€™s been up with Frank after a demon went after his daughter last season. Now serving time for murders the demon actually committed, Frank gets a visit from Abbie and a tip to get himself committed to Tarrytown Psychiatric, where they can have better access to him and keep him in the loop on the battle against Moloch. But Abbieâ€™s not the only one who knows how to track Frank down. Before the end of the episode, Henry poses as a lawyer for Frank and manages to capture his signature in Frankâ€™s blood. Seriously, WHAT did Frank just unwittingly sign and what role will Frank have in the rise of Moloch??

Meanwhile, Abbie and Ichabod are plotting to get Katrina away from Headless. I think I have to start calling him Abraham, since heâ€™s getting more face time than ever before.Â Ichabod puts together that Abraham is planning a binding ceremony for Katrina, which includes lovely details like mixing their blood together, tying her up in a circle of skulls and, oh yes, beheading her since they have to be a matching pair. Heâ€™s really sweet on her, isnâ€™t he?Â Ichabod finds in Benjamin Franklinâ€™s journals a plan from 200 years ago to take down the Headless Horseman: just stitch together strong, beefy parts of fallen soldiers, animate the patchwork man via witchcraft to do battle for them and call it The Kindred. Itâ€™s worth noting itâ€™s actually Katrinaâ€™s coven that puts together the spell for The Kindred. Abbie and Ichabod just happen to have access to the missing ingredient, olâ€™ Headlessâ€™s head in a box.Â

As great as it is to use puns like â€œFranklinsteinâ€™s monster,â€ the plan here was a little haphazard and telling of a bigger problem Abbie and Ichabod have on their hands. How smart is it to unleash some kind of monster of unspeakable power, when they have no idea how to control it or even communicate with it?Â  Even with the monster seemingly on the side of good, by the end of the episode, The Kindred has disappeared and Abbie and Ichabod arenâ€™t too concerned about tracking him down. Ichabod from last season would have had more respect for forces they donâ€™t know a lot about. He definitely wouldnâ€™t let the monster run off with Headlessâ€™s Head. But to save Katrina, heâ€™s willing to resurrect an actual monster and Abbie, while cautious, is following his lead. Yet a telling conversation Abbie and Ichabod have in the tunnels may show some insight as to where this will go:

Abbie: “My faith in you is my greatest weakness.”

Ichabod: “Thatâ€™s what they want you to believe. (pause) Do you think Katrina is my greatest weakness?”

While Ichabod is willing to play with powers he doesnâ€™t understand and battle his own son to get his wife back, Katrina is more focused on the end game to stop Molochâ€™s ascension than reuniting with Ichabod. When Ichabod comes to her rescue, she chooses to stay the captive of Abraham and Henry. Claiming she wants to stay to act as spy and to save her son, you canâ€™t help but wonder how much we can actually trust Katrina. Sheâ€™s putting a lot of faith in her ability to manipulate Abraham. Or is she actually buying into Abrahamâ€™s story that Ichabod would put Abbie before her? Either way, her choice to stay captive when she has the chance to escape with her husband is a little sketch.

Diving into next week, hereâ€™s the scorecard. Abbie and Ichabod will use Katrina as a spy and gain insight into Abraham and Henryâ€™s plan to raise Moloch. Frank Irving is now committed at Tarrytown Psychiatric, where Jenny used to be locked up. Jenny is now sitting in Sleepy Hollow jail until Abbie can get her out. Sheriff Reyes is circling them all. Oh, and Henry now has Frankâ€™s signature in blood. The Kindred is running amuck free somewhere. In an episode that didnâ€™t do much to push us forward, weâ€™re starting to see the foundation of where things may go. And the cracks that could bring it all down around them.

Currently you have JavaScript disabled. In order to post comments, please make sure JavaScript and Cookies are enabled, and reload the page. Click here for instructions on how to enable JavaScript in your browser.