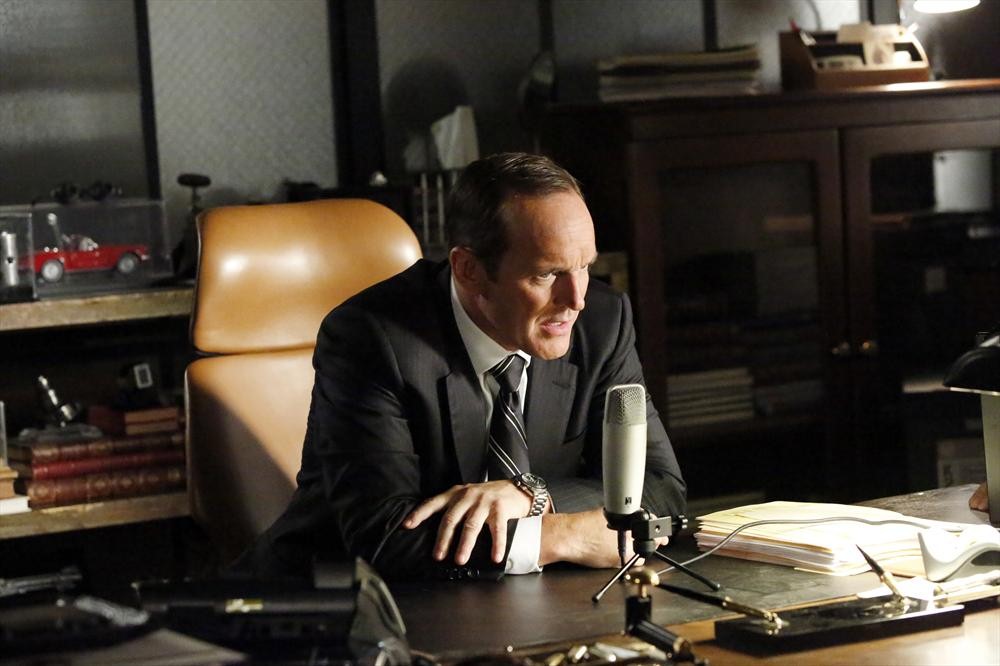 Previously, on Agents of S.H.I.E.L.D: Hydra has its tentacles everywhere; S.H.I.E.L.D is broken into a thousand little pieces; former Director Fury (Samuel L. Jackson) is in hiding, leaving Agent Coulson (Clark Gregg) as the new Director, which is a great choice, but he went all crazy, music of the universe at the end of last season, so we’ll see; Ward (Brett Dalton) is a traitor, which finally made him interesting; Skye (Chloe Bennet) has a creepy dad somewhere and a big chunk of my heart was left at the bottom of the ocean when the Twins, Fitz and Simmons (Iain De Caestecker and Elizabeth Henstridge) were left to die, managed to escape and Fitz suffered brain damaged due to oxygen deprivation. Pack it in, go home. I can’t go on without my twins.

Last season, SHIELD started off slowly and was a bit of a disappointment starting out, but managed to build momentum, and after the release of Captain America: The Winter Soldier, really found its footing as a show worth watching on its own merits, and as part of the Marvel Cinematic Universe. It wasn’t a seamless or painless transition, but it was worthwhile to wait the season out.

The second season opener, “Shadows,” tries to build on the show’s momentum while giving us a whole lot of exposition all at once and introduce a plug for ABC’s upcoming series Agent Carter all at once. That’s a lot of work for one little show. Carter (Hayley Atwell,Â The Pillars of the Earth) and the Howling Commandos (my life can only be improved by more Dum Dum Duggan) are cleaning up the last Hydra outpost at the end of WW2 and packing up all the evil crap they’ve collected over the years. It’s our first look at the Obelisk, which Carter warns mustn’t be touched (foreshadowing) before it gets boxed up and presumably taken to an Indiana Jones-type warehouse to languish forever. Or until it gets busted out by Hydra. Which is more likely?

The episode is aptly titled, as the theme of shadows runs throughout the show. Coulson tells his agents to “Go dark,” before the credits even roll; the team, which has grown by two, Lance Hunter (Nick Blood) and Isabelle â€œIzzyâ€ Hartley (Lucy Lawless), is tucked away in Billy Koenig’s (Patton Oswalt) fortress, forced to live in hiding and solitude, where an imprisoned Ward’s dark thoughts have him on a suicidal path that I find self-pitying and a little pathetic. You made your choices, and all of them were as bad as that horrible beard you’ve sprouted (the Facial Hair of Regret) so have yourself a good cry and stop. Just… stop. And the Obelisk is, indeed, stashed in a dark and lonely warehouse.

And Fitz, who seems to be on the mend, has been talking to Simmons as he works in SHIELD’s lab and searches for words he can’t grasp and formulas he can’t quite remember. People smarter than me probably figured out that Simmons wasn’t actually there, that Fitz was either hallucinating her or so deeply damaged that he can’t heal without having some part of Jemma with him, but I didn’t. I was so happy to see them together it never occurred to me that Simmons was just living in the shadows of Fitz’s mind and she wasn’t really there. Fitz is just so broken, which, aside from saddening me deeply, brought up the question, where is she?

The team’s new members aren’t the only change, Skye has a sassy new haircut (she has Power Bangs) and some serious gun skills. She is a full-on field agent now. How much time has passed? She’s like, leading in the field. Is this a good idea? Did she play a lot of first person shooter games during breaks from hacking into everything? There’s also plenty of beer drinking going on back at Koenig’s sanctuary. I guess that’s to show us this team has matured and changed; it’s a tougher, grittier SHIELD. They’re all like Han Solo in the cantina in Mos Eisley, just attitude and drinking and “I shot first. So what? I’ll do it again.”

Our Big Bad this week is Carl â€œCrusherâ€ Creel (Brian Patrick Wade, Teen Wolf; The Big Bang Theory), known as The Absorbing Man, a villain from Marvel Comics. Creel can absorb the properties of any substance he touches, which led to a heated discussion in my house with my son about why he wouldn’t want to absorb gold. (“It’s too soft, Tobelet.” “But it’s GOLD!”)

Apparently, the guy really, really likes killing, which is good, because he’s responsible for the death of Izzie Hartley when he causes a car crash as she and Lance Hunter are rushing to the hospital because she touched the Obelisk, which Creel wants, and it is killing her. Good advice for everyone: When handling anything Hydra owns, previously owned or wants to own, wear gloves. It just makes sense.

As a season premiere, “Shadows” was mostly successful. It set up the team as a group working from the fringe, out-numbered by Hydra’s growing threat and on-the-run, which adds a bit more urgency and tension to the show, which is something it needed. Hydra has the Obelisk, and a super-villain that’s only weakness seems to be that he can only be stopped by rubber (So. Enlist the Michelin Man into SHIELD?). The SHIELD agents are working from a position of weakness, and that’s not something they’re accustomed to. I’m interested to see where it will take them.

Now, please find Simmons. I’m a little lost without her.

And We're Back! Sleepy Hollow "This is War"

Arrow Reveals: Clues for the Future?

The Walking Dead “This Sorrowful Life”