And We’re Back! Sleepy Hollow “This is War” 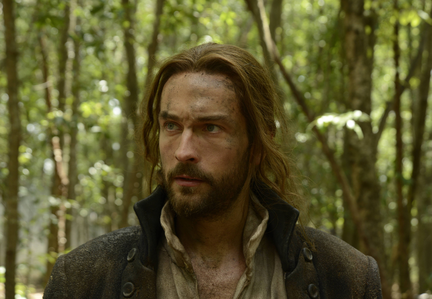 Sleepy Hollow didnâ€™t take any time to let viewers catch their breath (or get a crash course on what went down last season) in the season two premiere. Jumping into another mystery-of-the-week, Ichabod and Abbie are hot on the trail of an other-worldly key that once belonged to none other than Benjamin Franklin. Well, scratch that. They werenâ€™t actually on the trail of it. Really, Ichabod was still stuck in the pine coffin his son Jeremy/Henry stuck him in and Abbie was still trapped in Purgatory. But a little ruse straight from Henry and Moloch complete with adorable Abbie and Ichabod banter on 21st century birthday traditions had them going for a minute. It did serve the purpose of getting us to this weekâ€™s Cool Historical Figure and clue to Molochâ€™s grand plan.

We canâ€™t get too much further into the recap of â€œThis Is Warâ€ without saying â€œHoly friggin’ guest star!â€ Timothy Busfield, you know Thirtysomething, Revenge of the Nerds, Field of Dreams, West Wing Timothy BusfieldÂ¸ as the nudist, gasbag Benjamin Franklin. According to Crane, who of course knew him well, Benjamin Franklin was a bit of an egocentric. Iâ€™m paraphrasing. I think I caught words like â€œblowhardâ€ and â€œblatherskite.â€ The fact that Ben Franklin liked running around naked as a jaybird must have slipped through the history books. In any case, weâ€™ll be seeing Braggart Ben a few more times this season.

Ben Franklin and a certain key he once had are the, ahem, key to unlocking the gates of Purgatory without trapping other souls inside. Something Ichabod could surely use to break Abbie out. So after he creates a makeshift bomb out of the sulfur dirt above his coffin and blows his way to freedom, Ichabod is on the hunt to enlist help. Namely, Jenny, who just happens to be held captive by Henry, aka The Horseman of War, who is busy sin-eating his way through her memories to find the key. Typical bad guy, he leaves Jenny with a lackey. Doesnâ€™t he realize Jenny is kind of, um, badass? It doesnâ€™t take much before sheâ€™s broken herself out of there. (Although, as an aside, Crane trying to drive a stolen ambulance wins for Cute Crane Moment of the week. â€œMust learn to drive!â€)

Meanwhile, Katrina had been turned over to Abraham, aka The Horseman of Death, who apparently hasnâ€™t given up on his affections for the witch. Itâ€™s been 200 years, dude. You donâ€™t have a head. No amount of walking around showing off the muscles without the noggin is gonna turn her head. (Pun intended.) Yet old Headless does have an amulet necklace that allows her to see Abraham as he was once upon a time (yes, with his head) and even talk with him. Katrina does the equivalent of spit in the face (except he doesnâ€™t have a face) and vehemently reminds him sheâ€™s a married woman and that heâ€™s not human. Iâ€™m just putting it out there. Please donâ€™t make this a potential love triangle with Crane, Katrina and Abraham/Headless. Heâ€™s Headless. Letâ€™s just leave him that way.

Back at Team Jenny and Crane, theyâ€™ve deciphered all of Benâ€™s clues and have found the key. During this, Abbie has bumped into a familiar face in Purgatory. Brooks! Still trying to redeem himself, Brooks points out Molochâ€™s growing farm of demon soldiers (Ew!) and the way to communicate with the earthly world. Abbie manages to get to Ichabod and they get the reunion fans have been waiting for all summer. Hooray! But then back to business, because they have to actually get Abbie out while keeping Molochâ€™s demon army in.

Which they manage to do. Naturally. (Things like doppelganger tricksters popped up but they beat â€˜em.) A part of me did wish we would have a few more episodes of Ichabod working tirelessly to get Abbie out until I remembered that heâ€™s got bigger things on his plate. His long-dead wife, now back from Purgatory and held captive, still needs saving. Although, isnâ€™t Katrina a witch? How long before she unleashes some power all up on Headless?

Ah ha, we canâ€™t forget the big set-up for next week and possibly the season. Moloch, unfazed by the loss of the key, bestows upon Henry a soul-powered armor suit. One he can control with those sin-eating eyes of his and that yields fire swords. The war is on and Moloch ainâ€™t slowing down. If anything, this episode showed us that Abbie and Ichabod will need to be on the offensive to battle Moloch and the Horsemen. Weâ€™ve still got two Horsemen yet to be revealed. Itâ€™s gonna be a great season!

-So we can pretty much assume Ichabod knew everyone that had anything to do with the Revolutionary War, colonial America and secret societies from back in the day. Know what? I totally buy that. Not only because this show rocks and a little plot point like that helps moves things along. But also because you have to assume Sleepy Hollow and the surrounding areas were small little villages at the time. Everyone knew everyone. Just go with it.

-Still not over this Headless/Katrina thing. Donâ€™t. Just donâ€™t.

-Abbie and Crane havenâ€™t missed a beat. How cute was the in-their-heads-surprise party for two? Plus, FIST BUMP!

-Ichabod attempting to use his cell to get help before blasting his way out of the coffin was brilliant. Crane is adapting to modern life and itâ€™d be ridiculous to ignore that.

-Some major gems when it came to quotes this episode, including some we can assume will apply to the rest of the season. Things like â€œAnything can be tricked into believing a lieâ€ (Henry) or â€œThe impossible becomes our realityâ€ (Crane).

Once Upon a Time “Think Lovely Thoughts”

Once Upon a Time “Poor Unfortunate Soul”