[Warning: General spoilers for the rest of the season.]

Tonight’s episode is the middle child between the first six and last six, and we’ve already had some MAJOR developments. We head into the back half of the season with Ingrid freed from her creature bond but down a BFF, Killian under a spell from his new wife, and something seriously creepy going on with Frederick.

TV Goodness chatted with showrunners Maggie Friedman and Richard Hatem and cast members Madchen Amick and Eric Winter at SDCC about what’s coming for the rest of the season.

Friedman teased that the last four episodes are going to be bananas. “[They’re] pretty nuts. A lot happens,” she says. “As was teased in episode two. Ingrid found a book where there was a picture of a family member who was sort of under a veil and she doesn’t know who that person is. And we’re gonna start to learn more about that…there’s another Beauchamp out there.”

While it’s been a bumpy road for Ingrid, Friedman promises she will be OK. “She’s had to suffer a bit. But she’s also so smart and so grounded,” she says. “And she is going to have a lot of happiness and a lot of heartbreak this season. There is some crazy stuff that happens to Ingrid. She’s got so much heart. So in a way, it sucks to see her suffer. You kind of want to put her character through the wringer because that’s what life is. We all go through the wringer and we can all identify with her so much.” 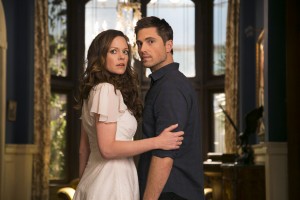 Hatem tipped that the season two bucket list isn’t done, nor is the family tree expansion. “We’re gonna lose a beloved character. And the Beauchamp family is bigger than we thought,” he says. As for Freya and Killian and Eva, he says we have to wait and see. “I think things resolve in a very surprising way but…it takes a while. The course of true love is never easy.”

Friedman adds that Killian and Freya’s complicated history will have a little more exposure this season, too. “We’re gonna learn a few things this summer about…why their relationship is so complicated in a way neither of them knew or expected,” she point out.
“They do have a very long history with each other throughout centuries. It’s a complicated journey and when you have hopefully many episodes to come, anything can happen.”

Dash has had a winding storyline this season as he’s embraced his powers, and been spellcast while trying to help Ingrid. Winter is having a ball with all of it. “The fans have been really supportive of the change in Dash. At least as far as what I see on Twitter and what people respond directly to me. They really love that…he’s sort of made this leap into a different…area for himself,” he says. “And he’s also walking a tight line of trying to do the right thing but also being overtaken by something greater at times and it’s been very well received. So that I think is great. [Last] year they were [fans wanting] more of Dash and Killian’s…backstory. And we’re getting into that.”

Amick is enjoying the cast expansion this season, even if the boys are all pretty. “Well it’s messed up when the men are more beautiful than the women. I’ll say that much,” she joked. “They fit right into this Coven. They are just such great men that are respectful and so great to work with. And it’s just great to have a little bit of testosterone in the mix. It gives us something fun to play with.”

She also teased that we can look for things to heat up with her and Tommy in the coming weeks. “He definitely has Wendy’s attention, that’s for sure. And he’s one of the few men that she’s crossed that really can just…give her shit right back to her. So that intrigues her,” she says. “You’re gonna see a lot more Tommy and Wendy. We have an episode [coming up] that is actually nicknamed a “Sexpisode.”

But first, here’s the logline for tonight’s episode: Tarkoff (Buffy‘s James Marsters), an old friend of the family, pays a visit to Joanna and Freddie. Wendy, Freya, Ingrid, and Dash attend an art gala where Wendy encounters someone from her past. Killian has doubts about his feelings for Eva.

Hell on Wheels Moment of Goodness: Eva and Durant's Heart to Heart in "Reckoning"