Motive has some familiar faces tonight as Rookie Blue‘sÂ Enuka Okuma pops in for an episode about an author who’s murdered for a series of complicated reasons. Also look forÂ Jesse Moss (now on Cedar Cove), The Killing‘s Ben Cotton, Robert Moloney (K9 the series), andÂ Lochlyn Munro (pick something).

It’s a strong episode with the usual twists and turns, anchored by a strong guest cast, but this time there literally are no winners. There is, however, a gem moment at the end of the hour.

Here’s the official logline: After a best-selling murder mystery author is poisoned with a rare toxin, Detectives Flynn and Vega must determine fan from foe. Meanwhile, Detective Lucas’ personal life takes a hit, while Angie receives a pleasant surprise, courtesy of Vega. 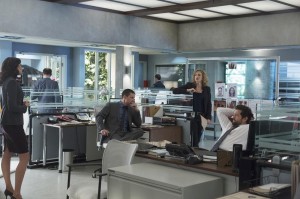 Motive airs tonight at 10/9c on ABC. Next week wraps up the second season. Here’s a preview of “Kiss of Death.”