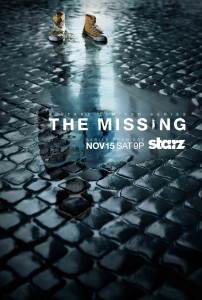 StarzÂ recentlyÂ announced the debut of a limited series coming your way later this year. It’s called The Missing.

Series Synopsis: The Missing is a gripping dramatic thriller that goes inside the mind of a father, Tony Hughes, played by James Nesbitt (The Hobbit trilogy), desperate to locate his lost son. With help from local police detective, Julien Baptiste, played by Tcheky Karyo (Goldeneye), Tony embarks on an obsessive quest to find his son and those responsible for his disappearance. A gripping puzzle with twists and turns at every stage, Tonyâ€™s exhaustive search fractures his relationship with his wife, Emily, played by Frances Oâ€™Connor (A.I.: Artificial Intelligence), and threatens to destroy his life. Told through a delicate and complex narrative, â€œThe Missingâ€ unfolds over two time frames simultaneously.

Guest Star Goodness: Kellie Martin on Satisfaction "...Through Self Discovery"