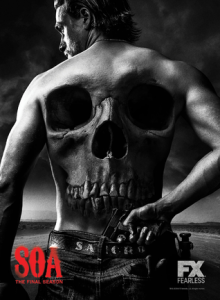 The final season is almost upon us. I have no idea why it took me such a long time to sample this show especially sinceÂ I have a number of friends who are obsessed with it. With a little help from Netflix I’m now caught up. And wow. So when I learned that the Sons of Anarchy team would be at Comic-Con this year I knew I had to get into the press room. It was lively, surprising, revealing and loud.Â Series creator Kurt Sutter, star Katey Sagal and executive producer/director Paris Barclay share some scoop and their insights onÂ the final season of the show.

Season 7 of Sons of Anarchy premieres Tuesday, September 9th at 10/9c on FX.