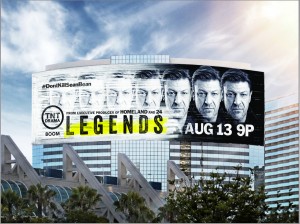 Quite frankly, you had me at Sean Bean. I love that TNT wanted to be in business with him and that the producers are guaranteeing his character won’t die (or they can guarantee it until the show gets canceled). But more than that, I love the concept of this series – of men and women who go so far undercover they are living multiple lives. Although it doesn’t sound like a healthy way to have any sort of relationship, the people who do these jobs are keeping us safe.

InÂ Legends, Sean Bean plays Martin Odum, an undercover agent working for the FBI’s Deep Cover Operations (DCO) division. Martin has the uncanny ability to transform himself into a completely different person for each job. But he begins to question his own identity when a mysterious stranger suggests that Martin isnâ€™t the man he believes himself to be.Â LegendsÂ also starsÂ Ali LarterÂ as Crystal McGuire, a fellow operative who has a history with Martin;Â Morris ChestnutÂ as Tony Rice, a smart, quick-witted and charming DCO agent;Â Tina MajorinoÂ as Maggie Harris, the newest member of the DCO team;Â Steve HarrisÂ as Nelson Gates, the director of the DCO Task Force; andÂ Amber VallettaÂ as Sonya Odum, Martin’s ex-wife; andÂ Mason CookÂ as Martin’s pre-teen son, Aiden.

As Martin tries to find answers to the questions about his identity, he must also continue his primary job as an undercover operative, taking on such roles as a Serbian extremist, a Scottish soccer club executive, a corrupt Chicago police officer, British special forces colonel and a legendary computer hacker. There are many times, however, when he must choose between the demands of his job and his desperate desire to solve the mystery of his own identity. And he doesn’t always make the right choice.