WARNING: MildÂ Under the Dome spoilers

CBS’ Under the Dome returned to Comic-Con 2014 for its second year in a row. And when we hit the press room, a couple of its stars had some things to address. You see, at the end of this week’s “Revelation” episode, Julia and Barbie were on the outs. Thankfully, Rachelle LeFevre and Mike Vogel were able toÂ talk aboutÂ thisÂ bump in the road for their characters.Â

On Julia kicking Barbie to the curb

Rachelle LeFevre: “Not tonight, honey, I have a headache.”

Mike: “I like to think he chose to walk away is what happened, all right?”

On the status of Julia and Barbie’s relationship going forward

Rachelle: “It’s interesting. It’s the first time our characters are having ideological differences. The big question is always…you’ve only known each other for three weeks. The dome came down, he killed your husband. There was all this madness that happened. But the thing that really facilitated these two people coming together in such an intense way in such a short time was they’re in an impossible situation, an unfathomable situation, the stakes are really high. And everything is different in a heartbeat. And they found each other having a common goal that they want the best for people. They have a sort of common view of how they think that we should survive. And this is the first time that they’ve ever had a conversation about anything where that was different. Where they potentially disagreed on what the next step was. So I think it’s the two of them coming face to face going ‘oh, oh, wait a minute. I thought we were together. We never talked about this. What is this? You know?

Mike: “But I think it’s also as in life, things get misunderstood and intentions get blurred. I think Barbie’s reasoning in the moment for the choices he made seemed like he was signing on to this extermination plan for the town but in reality it was that old adage of, ‘keep your friends close your enemies closer.’ He wanted to see what Jim and them were up to and couldn’t exactly tell her in the moment. And as things happen on our little show, they happen so fast that he has not had the chance to explain — that’s coming — he has not had the chance to explain those intentions yet. So it’s caused that rift.”

On the clip they showed during the Under the Dome Comic-Con panel Barbie was going down aÂ cavern — how does that dangerous situation come about?

Mike: “Well where are we? The reality is…is it’s a Stephen King show and people go. And there’s nothing saying that I finished out the rest of the year. So we’ll have to see where that leads. But it’s certainly — at face value — doesn’t seem like it ends very well for Barbie.”

More on why Barbie finds himself in this “cavernous” predicament

Rachelle: “Well, in terms of the show, Joe finds an anomaly in the dome and is able to get an email and goes to the school and they essentially find this portal; they find these tunnels that look like they might go somewhere else. And Barbie’s the first guy to put himself forward. He’s the first guy to volunteer for the mission, where does this go…And so he’s essentially going off to explore the unknown. As far as we know at this point there’s no way out of the dome and this looks to be the first sign that we’ve had that there’s something else…that there’s a way out maybe. It’s like somebody’s gotta go first and find out what that is. So he’s the first guy to go into the darkness and see what that is.”

On Julia vs. Jim

Rachelle: “Well, firstly, I think the Big Jim / Julia…the big difference there is about…Big Jim really craves power. And thinks that he’s been born to it and is entitled and that makes him a terrible leader. As it does in real life. And Julia has been given a position of power but is more reluctant which I think makes her more pragmatic, more cautious and a better leader. The problem is she won’t do what he is willing to do to get power and to keep it. So it keeps fluctuating ’cause it’s like he’ll play the dirty game and win everybody back and she plays clean and then maybe it sways to her because the dome has some influence and is trying to right things. It’s like playing cards with the devil. You feel like you’re never gonna win. And so it’s an interesting thing to watch that play out.”

Under the Dome airs Mondays at 10/9c on CBS. As for Comic-Con 2014, see below for the entire panel as well as some photos from the press room. 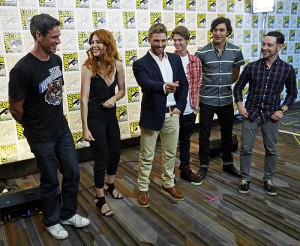 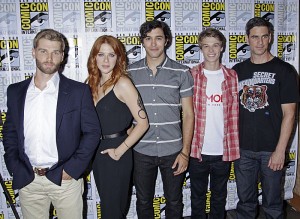 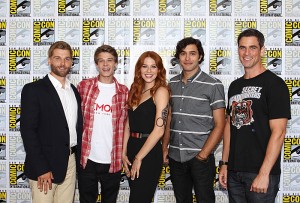