Comedy Central’s Moonbeam City is officially on my TV radar. It’s a new animated seriesÂ that made its debut Thursday at Comic-Con 2014. I’m not going to lie. My main reason for tuning in is Rob Lowe voicing aÂ lead character that dresses a lot like Don Johnson’s Miami Vice detective Sonny Crockett and looks like he came straight off a Duran Duran album cover. When I found out that both Kate Mara and Elizabeth Banks voice characters in this new universe, I knew I was going to have to watch.

Synopsis for “Moonbeam City”: It’s an absurdist take on the gritty, sex-drenched crime dramas from the 1980s and follows undercover detective Dazzle Novak (voiced by Rob Lowe), a handsome idiot who commits more crimes than most criminals. The show also stars his tyrannical chief, Pizzaz Miller (Elizabeth Banks), who won’t get off his back and hotshot rookie Rad Cunningham (Will Forte) who is dying to see him fail. With the world against him, Dazzle is thrust into a living nightmare: having to do actual police work. Moonbeam City is executive produced by Will Gluck’s Olive Bridge Entertainment in association with Titmouse Studios.

A first look at Moonbeam City: 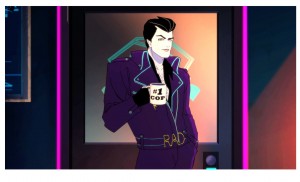 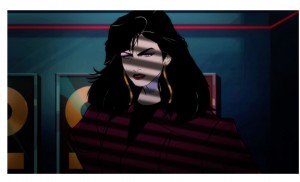