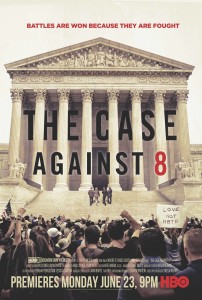 Marriage equality has always been a civil rights issue in my eyes. I don’t know if it’s the way that I was raised, or the people I know, or my belief for social justice, but I think love is love. I believe people should be able to marry the person they want to spend the rest of their lives with, regardless of their gender. I remember when Prop 8 passed and as a Californian, I was ashamed. This documentary is as much for people who support equal rights as it is for those who believe marriage a “conservative value” and is defined as a union between a man and a woman. We see two couples – Kris Perry and Sandy Stier and Paul Katami and Jeff Zarrillo – fight for their beliefs. We also see Ted Olsen and David Boies, two lawyers from opposite sides of the political aisle, come together to work on this important issue. For people who support all love, this film is a testament to their commitment. For people who don’t, I hope they see it as an examination of many American’s determination to have a legally recognized union, and to stop being seen as second class citizens. Either way, it’s a film everyone needs to watch.

The riveting documentary The Case Against 8 takes an in-depth look at the historic federal lawsuit filed in an effort to overturn Prop 8, California’s discriminatory ban on same-sex marriage. Shooting over give years, with exclusive behind-the-scenes footage of the powerhouse legal team of David Boies and Ted Olson and the four plaintiffs in the suits, directors and producers Ben Cotner and Ryan White (Good Ol’ Freda, Pelada) have created a powerful emotional account of the journey that took the fight for marriage equality all the way to the U.S. Supreme Court.

The Case Against 8 premieres tonight at 9/8c on HBO.