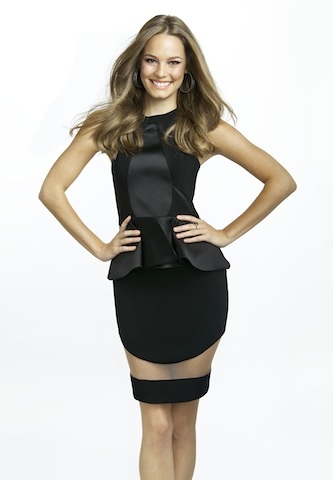 Tonight marks the beginning of the end of HBO’s True Blood. For this seventh and final season, Sookie and Alcide are together, Sam’s mayor, Eric is MIA (and hopefully not gone forever), Pam’s off chasing after him, and Tara and her mom are experiencing a tentative truce. Emphasis on tentative knowing these two. Bill’s no longer Bilith (thankfully). And Arlene has to face life without Terry.

Oh and Andy Bellefleur’s a dad to a teenager that’s half faerie…and was born not too long ago. This case of Primetime SORAS (Soap Opera Rapid Aging Syndrome) means Bailey Noble was able to join the show in season six. She plays Andy’s lone surviving faerie daughter, a wonderfully naive girlÂ even though a vampire (Jessica) killed her three other sisters because she couldn’t control her blood lust. After all, faery blood is like catnip to vamps.

TV Goodness recently interviewed the season seven series regular about her role on True Blood, what it’s like to work with costars Chris Bauer and Carrie Preston and the most challenging part of playing Adilyn. 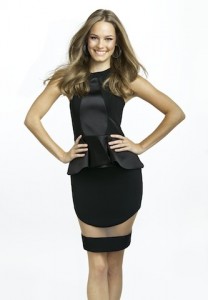 TV GOODNESS: Can you talk about getting the role of Adilyn on True Blood? What was the audition process like?

Bailey Noble: I auditioned for Adilyn and that night they told me I was on hold for the role. It wasn’t until about 2 months later that I knew I had booked at least a guest spot. All of the sisters had to re-audition to see which one of us would become recurring. And I found out on the way to my first table read that I would be surviving! The wait was well worth it!

TV GOODNESS: How did you decide to approach playing a character who’s half faerie and half human?

Bailey: Adilyn is really just an average teenager! She is fumbling through and learning along the way just like I did when I was a teenager so I drew from my own experiences.

TV GOODNESS: What are you enjoying most about playing Adilyn?

Bailey: I love how hopeful she is! She has a love for life and that quality reminds me to bring that into my own life.

Bailey: Adilyn has a very loud scream, so after a few takes it hurts my throat and the crew’s ears! I would say the most challenging part of being on a supernatural series is imagining the things in the moment that are created in post production.

TV GOODNESS: How different is your character this season as opposed to last season?

Bailey: Adilyn is still the same with just a few more months and experiences under her belt! She still has wonder and naivety.

TV GOODNESS: Can you talk about the final season of True Blood? Why are fans going to want to watch these final episodes?

Bailey: I can’t give away any plots points but, this is the last time you will see these characters in Bon Temps. There is something special about that.

TV GOODNESS: What was one of your favorite moments from this upcoming season?

Bailey: I was filming a scene with Chris Bauer and he was supposed to be yelling at me but I couldn’t stop laughing! I love moments like that!

TV GOODNESS: Who is Adilyn interacting with the most this season?

Bailey: Adilyn spends a lot of time with her family. I love that the show makes family a very important element.

TV GOODNESS: Can you talk about working with Chris Bauer and Carrie Preston?

Bailey: They are amazing actors and human beings! I have learned so much just from watching they way they work on set. I really hope I get to work with both of them in the future again!

TV GOODNESS: How do you rank True Blood as far as acting experiences in your career?

Bailey: Number one! I always learn something new from every set I’m on, but being on the True Blood set so often has been my biggest school.

TV GOODNESS: What have you learned from being on True Blood?

Bailey: I’ve learned how well a cast and crew can work together!

TV GOODNESS: What does your family think of your True Blood role?

Bailey: They love it! My parents are super excited and they get to see me on TV from across the country. My aunt has also been a serious True Blood fan from the beginning. I usually tell my grandparents which episodes they can and cannot watch haha!

TV GOODNESS: What’s next for you?

Bailey: Right now I’m working on a short film for AFI called The Haircut. I’m so excited about this film because it features strong roles for women and is set in 1976. After that I plan on working really hard to find my next job!