Any Other Name: A Longmire Mystery by Craig Johnson [BOOK GIVEAWAY] 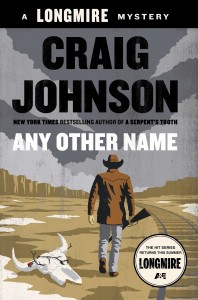 We’ve been fans of A&E’s Longmire since it premiered in 2012. It’s been interesting (by which we mean intriguing, illuminating, rewarding and sometimes confusing and challenging) getting to know these characters and seeing their struggles – both on and off the job. But we’ve loved every minute of it. So if you’re a longtime fan of the books and/or a new fan of the series, we’re giving you a chance to win Craig Johnson‘s latest Longmire mystery.

Riding the critical and ratings success wave of season two of A&E-TV’s highest rated scripted drama Longmire, Craig Johnson saddles up for the summer 2014 publication of his eleventh Sheriff Walt Longmire mystery, Any Other Name. This time Walt strays from his own terrain to unearth threatening secrets buried in a neighboring county.

In the depths of a high-plains winter discontent, Sheriff Walt Longmire takes on a mercy case in an adjacent county as a favor to his old boss Lucian Connally and agrees to investigate the suicide of one of Lucian’s old friends. With the clock ticking on the birth of Lola, his first grandchild, and a red-eye flight to Philadelphia, Walt must find out why the victim and by-the-book detective may have suppressed evidence concerning three missing women. It’s a secret so dark that it took the detective’s life and will take others by the time justice, in the form of Sheriff Walt Longmire, is served.

The prize is provided by Penguin USA but Penguin USA is not a sponsor, administrator, or involved in any other way with this giveaway. Contest open to US residents only.

So drop us a line (or two) and let us know why you’d to win a copy of this book.

THIS CONTEST IS NOW CLOSED.