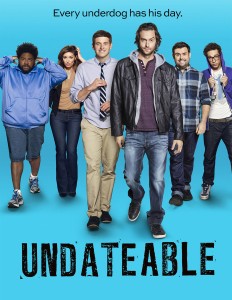 Tonight on NBC, it’s the new comedy, Undateable. This is another one of Bill Lawrence‘s babies — he is best known for Scrubs, Spin City and Cougar Town. He has this way of making you fall in love with the ensembles he assembles. And on Undateable, it’s no different. Here’s what you need to know:

NBC Synopsis:Â â€œUndateableâ€ is a new comedy series about a group of friends who are this close to finding a relationship â€” they just need a little help.Â Whether it’s due to a lack of style, the wrong job, or even just a bad haircut, everyone goes through a time in their lives when they’re undateable. Most of us eventually grow out of it, but some people need a little more help than others.Â  Enter Danny Burton (Chris Dâ€™Elia, â€œWhitneyâ€). Confident, attractive and impervious to outside opinions, 29-year-old Danny â€” who may be in a state of arrested development himself â€” decides to help out his new roommate, Justin Kearney (comedian Brent Morin), the owner of an unsuccessful bar and a chronic over thinker, and Justinâ€™s group of oddball friends â€” Shelly (comedian Ron Funches), Burski (comedian Rick Glassman) and Brett (David Fynn, â€œGame of Thronesâ€).Â  Danny introduces the gang to his recently divorced older sister, Leslie (Bianca Kajlich, â€œRules of Engagementâ€), who immediately bonds with this group of guys, as she feels a little stuck in her own life as well.Â  The gang spends most of their timeÂ  at Justin’s bar, helping solve each other’sÂ  respective problems over beers, and while they love to give each other a hard time, they always have each other’s back.

Actor: Chris D’Elia
Character: Danny Burton, the bad boy who has refuses to grow up. But now that he has a new group of friends in his life, the shallow end of the pool gets a little bit deeper.
TV Credits: He was Whitney Cummings’ significant other on NBC’s Whitney

Actor: Brent Morin
Character: Justin Kearney, an adorkable bar owner who doesn’t quite have a way with women. But he’ll get there someday, right?
TV Credits: Undateable is Morin’s very first acting job for series television (and he does a great job)

Actress: Bianca Kajlich
Character: Leslie Burton, Danny’s sister. Leslie is Danny’s sister and is a recently divorced wine-rep who, now single againf or the first time in ten years, is struggling to find her place in the single world. Once introduced to the guys at the bar, she bonds with them immediately as they welcome her into their gang.
TV Credits: She starred on CBS’ Rules of Engagement for seven seasons. She also had recurring roles on Dawson’s Creek and Boston Public.

Actor: Rick Glassman
Character: Justin’s friend, who is unapologetically honest. That quality gets him into a lot of trouble.
TV Credits: Other than Undateable, he did an episode of Hulu’s original comedy series, Deadbeat.

Actor: Ron Funches
Character: Shelly, one of Justin’s friends. He’s lovable and huggable…unless you go off on of his favorite topics, the city of Detroit. Then you better watch out.
TV Credits: New Girl, TBS’ Conan

Actor: David Fynn
Character: Brett, Justin’s gay friend and the bartender at Justin’s bar
TV Credits: The Brit has had roles in Game of Thrones, Doctor Who, Sherlock and Life’s Too Short

At a recent NBC press day, co-creator Bill Lawrence (along with Adam Sztykiel)Â had this to say about the cast:

We wanted to do a throwback show. I grew up loving and worshiping Cheers. I love multiâ€‘camera sitcoms that only have two or three sets and that you’re hoping, just watching, not only performers have fun with each other and riff and make up stuff on their own, but kind of laugh and enjoy each other. I think these guys pull it off.

I will be Watching Later on DVR. Actually, I’m not going to lie. I’ve already seen the first six episodes. And I ended up falling in love with the show. It’s a sitcomÂ that makes me laugh but also feels very comfortable. When I say that I mean it is like what Bill Lawrence says. It is a throwback type of series. And it makes me feel like I’m watching some of the feel good comedies we used to get on network TV. It took forever for Undateable to get an airdate but now I’m so happy you guys will get to watch it starting tonight.Â It’s a fun, silly little show that has a lot of heart. And I mean that in a good way. I actually think it is a perfect summer series. It doesn’t make you think too hard. It doesn’t require a lot of you. It just wants you to sit back and smile as you see how these friends tackle life with their quirky perspectives. I think Brent Morin (Justin), Bianca Kajlich (Leslie) and Ron Funches (Shelly) especially won me over.Â And there’s a sequence in the fifth episode that practically had me on the floor rolling from laughter. It is my favorite moment of the entire six episodes. I can’t wait to watch itÂ again. 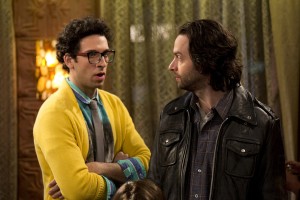 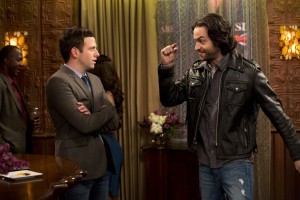 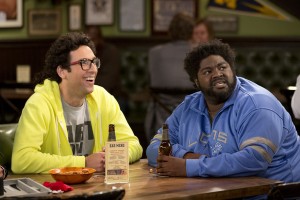 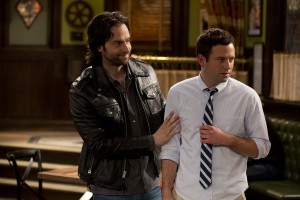 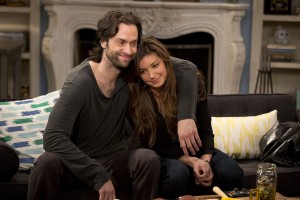 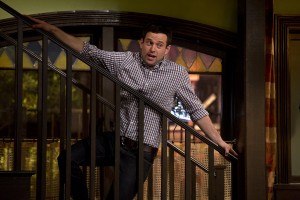 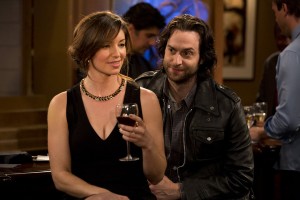