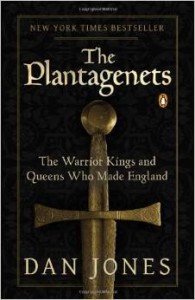 We usually limit our giveaways to DVDs (and Comic Con swag, when we have it), but when we learned that Game of Thrones‘ author George R.R. Martin was a fan of this family we knew we had to give people a chance to get their hands on a copy of The Plantagenets. If youâ€™ve been keeping up with this season of the show (or you’re a fan of Merlin or The Musketeers), you know how palace intrigue can be. There are always political machinations and assassination attempts, but mostly there are family members plotting and betraying one another – or sometimes coming together – to get ahead. And we love it.

The Plantagenets are one of the most fascinating families in British royal history. They ruled England for longer than any other dynasty before or since. There are a lot of legends and myths surrounding this family, but author and historian Dan Jones reveals the history behind those tall tales. Not only did the Plantagenets pave the way for Congress, but they are also known for their chivalry and heroism on the battlefield.

So if you want to learn more about this family and how they shaped the modern world, leave us a comment below.

Praise for The Plantagenets: The Warrior Kings and Queens Who Made England

George R.R. Martin has said, â€œbelieve me, the Starks and the Lannisters have nothing on the Capets and the Plantagenets.â€

“Fast-paced and accessible, The Plantagenets is old-fashioned storytelling and will be particularly appreciated by those who like their history red in tooth and claw.” — The Wall Street Journal

“An enjoyable, often harrowing journey through a bloody, insecure era in which many of the underpinnings of English kingship and Anglo-American constitutional thinking were formed.” — The Washington Post

The Plantagenets is available now in paperback from Penguin USA.

The prize is provided by Penguin USA but Penguin USA is not a sponsor, administrator, or involved in any other way with this giveaway. Contest open to US residents only.

THIS CONTEST IS NOW CLOSED.

The Operatives “The Dolphin Rescue” Post Mortem with Pete Bethune