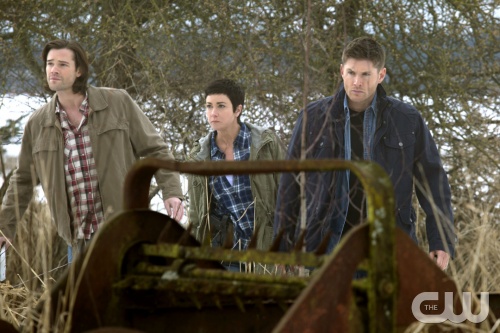 Sheriff Mills does her damnedest to try and save a girl who was kidnapped and forced into life as a blood slave to a nest of vampires. Much of the time, weâ€™re not sure whether Annie truly wants to break free from the creatures who fed on her. After all, she was part of their group long enough to actually lure humans to their death. So there was an element of — what did they call it in the episode — I think they referred to it as vampiric Stockholm Syndrome.

Jody makes it her mission to save AnnieÂ from this nasty nest and that menacing mama. Thereâ€™s a lot of parallels going on here between Jody and the girl’s sire. One main difference: Sheriff Mills is badass and heroic. And once the dust settled, that vamp mom was dead thanks to Jody.

So I donâ€™t have a lot to say about Supernatural â€œAlex Annie Alexis Ann.â€ Itâ€™s not because it wasnâ€™t a good episode. It was a very good standalone episode. It really showcased Sheriff Mills and I love that. And I think we got great performances from Kim Rhodes as well as the actress who played Alex Annie Alexis Ann (I’m calling her Annie in this review).Â

Not much happened with Sam and Dean other than the vamps sucking the blood out of Sam (he has to be sick of it always being about blood with him); and the effects of Deanâ€™s Mark of Cain living large resulting in what was an amazing beheading. I know the words â€œamazingâ€ and â€œbeheadingâ€ shouldnâ€™t be used together but thatâ€™s what I felt as I watched it unfold.

Itâ€™s clear Dean enjoyed the kill. I donâ€™t know about you guys but this version of Dean is reminding me of season two’s â€œBloodlustâ€ when he buzzed that vampire dead with Gordon and Sam watching. It also calls to mind how he confessed to his brother about starting to enjoy all that torture he inflicted during his hell stint. And, finally, I keep thinking back to his Purgatory days when he noted that everything was pure there. And now, thanks to the Mark of Cain, he seems to be enjoying the kill a little too much and thatâ€™s worrying Sam. Unfortunately, there isnâ€™t much that can be done about that right now, is there?

I think I say this every year and I know it will never change. But at this point in the season, Iâ€™d like the standalones to be done with and I want everything to be pure mythology. I’m aching for the show to dig deeper into the Mark of Cain story. But thatâ€™s just my opinion. However, I donâ€™t want to take anything away from the story that we were treated to this week, which came courtesy of writer Robert Berens. I just wish it came earlier in season nine.

Other than the vamps getting the jump on Sam and Dean once again, I was entertained, even though this episode was covered in sadnessâ€¦a thickÂ blanket of sadness. When AnnieÂ brought up Jodyâ€™s family, I felt so bad for the sheriff. And thatâ€™s why I think Rhodes is such an amazing actress (Iâ€™ve known this about her since she played Cindy on Another World back in the day). She is just so damn expressive. Like anyone who loses a child or their entire family, that pain stays with you. Forever. And it becomes a part of you like the nose on your face. It wears on you in an ever present way. Rhodes is so good at conveying that.Â

She definitely saw Annie as someone that could help relieve just a little bit of that sadness, that emptiness. And it may have colored her decisions in the episode. I really liked the conversation she had with Sam and Dean near the end of the hour:

Sam: “Speaking of apologies, we owe you a big one.”Â

Dean: “We were wrong about the girl.”Â

Jody: “No, you were rightâ€¦about me. My judgment was clouded. Working this case, it brought feelings back. Feelings Iâ€™d been trying to bury for years, you know, buried it under workâ€¦religionâ€¦even dating. We know how that worked out. But, you know, it was still there, you know, underneathâ€¦the grief. Donâ€™t know what that means for me. Just that Iâ€™ve been, Iâ€™ve been fooling myself to think that I could ignore it. Anyway, thank you, for coming outâ€¦or curing Alex.”

Sam: “You donâ€™t have to thank us. I mean youâ€™re the one who killed her sire, got her blood.”

Dean: “Well, speaking from experience. Itâ€™ll be a rough couple of days. But she should pull through. You sure you donâ€™t want us to stay?”

Why do I feel like Alex Annie Alexis Ann is going to stay with Sheriff Mills? The girl needs to heal and she needs a positive influence. Plus, who knows, the two may become the next hot hunting duo. It could happen.

I really appreciated the show not glossing over Jodyâ€™s tragic past. And I loved Berens includingÂ a nod to Deanâ€™s short-lived stint as a vampire.Â

OK, I guess I had more to say about this episode than I thought. Next week: itâ€™s the spinoff. Iâ€™m very curious to see how “Bloodlines” is going to play out. And I cannot wait to see Baby in Chi-town.

Supernatural airs Tuesdays at 9/8c on the CW.