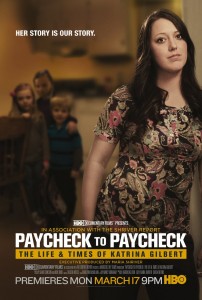 How many people do you know who are living from paycheck to paycheck, struggling to pay the bills, put food on the table, take care of their children or loved ones, and to just make ends meet? Katrina Gilbert is one such person. Unexpectedly single and raising three young children, her life is a constant struggle. She can’t get a higher paying job without the proper education or support, but making less than $10/hour puts a serious strain on her already over-taxed finances. Will she ever be able to get ahead? She’s hopeful.

From Maria Shiverâ€™s groundbreaking multi-platform project â€œThe Shriver Report: A Womanâ€™s Nation Pushes Back from the Brink,â€ Paycheck to Paycheck: The Life & Times of Katrina Gilbert tells the moving story of a year in the life of one mother whose daily struggles illuminate the challenges faced by more than 42 million American women and the 28 million children who depend on them. Directed and produced by Shari Cookson and Nick Doob (HBOâ€™s Emmy-winning The Memory Loss Tapes) and executive produced by Peabody and Emmy winner Maria Shriver (HBOâ€™s The Alzheimerâ€™s Project) and HBOâ€™s Sheila Nevins, the film is the unvarnished account of a single mom struggling to get ahead, but constantly getting knocked back by a system that almost seems designed to see her fail.