We’re kicking off a new column here at TV Goodness about all things related to TV movies and what better way to mark the debut than with Hallmark Channel‘s announcement this week of its 2014 slate. Get your DVRs warmed up, because they’re promising over 20 new films between now and the end of the year, and yes, they will be blowing out the holidays again with a six-week moviepalooza that begins November 1st. Not to be left out, sister network Hallmark Movie Channel announced they’re rolling out a rebrand and a new series of mystery movies kickstarted by a follow-on film series to Garage Sale Mystery (which I totally called).

Here’s a taste of what to expect on Hallmark Channel: 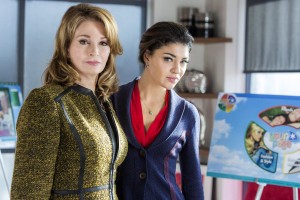 Lucky in Love
Coming up on April 5th and starring Gossip Girl‘s Jessica Szohr, DOOL‘s Deidre Hall, and Cult‘s Benjamin Hollingsworth, the film follows a woman’s realization that the April Foolâ€™s Day trick of her landing in the perfect life is anything but perfect.

A Lesson in Romance
Premiering April 19th and starring Kristy Swanson andÂ  ER‘s Scott Grimes, the film follows a newly single mom who finds herself in college alongside her twins.

Mother’s Day Off
On May 10th, Bonnie Somerville and Men in Trees‘ James Tupper star in a tale of a stay-at-home mom who takes her Mother’s Day off from her family.

Oh Say Can You See
Suits‘ Meghan Markle jumps over to the network in a 4th if July story about coming home to the one who got away and having to accept that maybe that ship has sailed. It premieres June 28th.

In the fall, look for:
Parenthood‘s Erika Christensen in My Boyfriend’s Dogs, about a woman who winds up recounting a curious taleÂ  of how she ended up in a diner in a wedding dress with three dogs in tow, and a mini The Facts of Life reunion as Lisa Whelchel and Kim Fields star alongside Bomb Girls‘ Antonio Cupo in For Better of Worse, about a widowed wedding planner who sparks with the divorce lawyer when he opens his practice next door. We’ll also get the seventh Good Witch film before that film series converts to a weekly episodic series in 2015.

In addition to greenlighting three new Garage Sale Mystery movies as a three-part, two-hour series of films that alternate under a new “Mystery Wheel Franchise,” in 2015, Hallmark Movie Channel will rename itself Hallmark Movies and Mysteries, and add two more mystery film series.Â The Gourmet Detective, based on the series of books by Peter King, will star and be executive produced by Cedar Cove/Arrow‘s Dylan Neal and written by his wife, Becky Southwell.

The third series of films is TBD but I’m hoping it will be a continuation of the Jesse Stone films with Tom Selleck, which were done by CBS but have settled into steady rerun rotation at Hallmark Movie Channel. There was passing mention of resuming the series at the January TCAs, but nothing has been formally announced yet. The move is a return of sorts for the network, which had previous success with the Jane Doe and Mystery Woman series of films, which still repeat regularly.

In the non-mystery category, Hallmark Movie Channel has The Color of Rain, based on the true story of a couple who find love after an unbelievable tragedy. It stars Lacey Chabert and Alphas‘ Warren Christie and will premiere May 31st. This summer, Intelligence‘s Meghan Ory will star in The Memory Book, about a photographer moved to track down a couple whose photographs she discovers in an old album.

Stay tuned for additional details. We’ll preview the films here when they roll around.