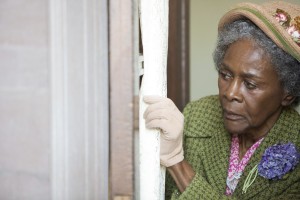 Lifetime Television goes highbrow this weekend with a new adaptation of the multi award-winning The Trip to Bountiful, starringÂ Ciciely Tyson, who won a Tony for her role in the play just last year on Broadway and is directed again by Michael Wilson, in his first film.

The Trip to BountifulÂ was originally written by Horton Foote (best known for adapting To Kill a Mockingbird to film and who I’m super happy we can claim as a a Texas writer) as live television production back in 1953, and its subsequent stage and film adaptations have been awarded an Academy Award, a Pulitzer, and multiple Tony Award nominations. In short, it’s a masterpiece, and a new adaptation is a brave undertaking. Joining Tyson are Vanessa Williams, Blair Underwood, Keke Palmer, and Clancy Brown.

The story is simple, heartfelt, and beautifully told. Set in the 1940s, the film follows Carrie Watts (Tyson), who lives with her busy, overprotective son, Ludie (Underwood) and pretentious daughter-in-law, Jessie Mae (Williams). No longer able to drive and forbidden to travel alone, she wishes for freedom from the confines of the house and begs her son to take her to visit her hometown of Bountiful. When he refuses, she escapes to the local bus station, where she befriends Thelma (Palmer), a young woman traveling home.

I’ve never seen it performed live, but I love the 1985 film version that won Geraldine Page the Academy Award for Best Actress. It’s always been a special story to me because it was written by Foote–who has ties that extend today into film and TV–he was the father-in-law to Revolution‘s Tim Guinee, and Mary Stuart Masterson is a cousin–and it was set and filmed here in Texas (this new version was filmed in Atlanta). I love that audiences will find it again, and some viewers may discover it for the first time. I love too, that Lifetime is doing these adaptations (this is the second, after 2012’s Steel Magnolias).

The Trip to Bountiful airs Saturday night at 8/7c and repeats at Midnight/11c and Sunday at 9/8c and throughout the month. Here’s a sneak peek:

Who Do You Think You Are Season Finale Preview: “Minnie Driver” [VIDEO]