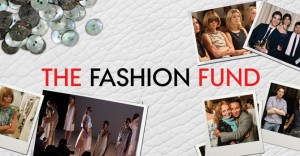 I don’t know much about the fashion industry, but I love shows about fashion (as you may know since I write about a lot of them). The CFDA Vogue Fashion Fund is something I’ve been vaguely aware of, but I had no idea how it worked or what it did for designers. So when I heard about this show I knew I had to watch. We probably all know (or think we know) at least a little bit about Vogue‘s Anna Wintour. What I might be enjoying most – in addition to getting to know all these designersÂ and their work – is also getting to know the judges. I like hearing which designers they’re passionate about, how they think the designers are doing either during the Uniqlo challenge or during Fashion Week and what they think the designers need to do to make their businessesÂ successful. It’s just a really interesting process and I feel like I’m learning a lot about fashion as well as the business of fashion.

The judges don’t expect the designers to show during fashion week, but it is encouraged. With the recognition the designers are getting as finalists, it would be a mistake not to take advantage of this opportunity. As the saying goes, the (fashion) world is watching. In “Fashion Week Frenzy,” the judges are looking to see how the designers work under pressure. They want to see how they put their shows together, although they’re much less interested in how the shows are received by the critics and the general public. For the judges, this is just another opportunity for the designers to move up or down in their estimation.

It was interesting to see how the designers handled the challenges of putting a show together. Naively, I thought they would all have runway shows. I was wondering how accessory designers Marc Alary and Parabellum’s Jason Jones would make that work. Instead, they both choose to show their work in a studio setting – which I think was a very smart decision. For the rest of the finalists, they either did runway shows or a presentation. I like that we got a peek behind the scenes. Tome had casting issues, Marc Alary scrambled a bit to find a place and everyone else had little hiccups along the way. I think my favorite type of show was the presentations, where the models just stood there. I loved that people could walk up to them and touch the fabric if they wanted and even talk to the designer about their inspirations. I think everyone made a great showing, but my favorite had to be Tome – even though I didn’t love the way Ryan Lobo talked to some of the models.

The press that comes out of New York Fashion Week can be invaluable, but even more valuable are the meetings with buyers that result from a good showing. Many of the designers now get to meet with people they’ve been trying to sell to for years, and that’s got to be especially exciting.

Next week marks a return to the Uniqlo challenge. I can’t wait to see how the designers do.

The Fashion Fund airs Wednesdays at 10/9c on Ovation.

3 Moments of Goodness from Game of Thrones “The Red Woman”

How to Get Away with Murder “He Has a Wife”

And We’re Back! Sleepy Hollow “This is War”