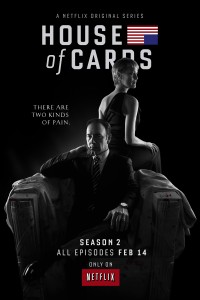 In the second season, Kevin Spaceyâ€˜s Francis and Robin Wrightâ€˜s Claire Underwood continue their ruthless rise to power as threats mount on all fronts. Kate Maraâ€˜s Zoe Barnes, an up-and-coming reporter and Francisâ€™s former paramour, is inching closer to the truth about his crimes. Michel Gillâ€˜s President Walkerâ€™s billionaire confidante Gerald McRaneyâ€˜s Raymond Tusk demands that Francis reciprocate political favors or face retribution. And Claire must confront the increasing glare of the spotlight as it eats away at her and Francisâ€™s once private existence. The Underwoodâ€™s must overcome these dangers â€” past and present â€” to avoid losing everything, regardless of collateral damage they leave in their wake.

Season Two of House of Cards premieres on Friday, February 14th on Netflix.

Frankâ€™s rapid ascension to the heights of power means big changes for both him and Claire, but his sudden rise creates powerful enemies and the increasing chance that his dark secrets will be exposed.Â  There is but one rule: Hunt or be hunted.

Get a glimpse into the complex relationship between Frank and Claire Underwood â€“ is their marriage more calculated than they let on?

The best of Frank Underwood.

Hell on Wheels Preview: “Any Sum Within Reason”