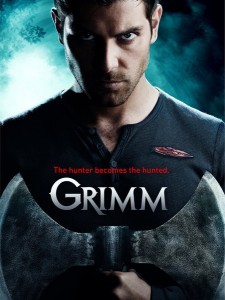 Tis the season for the Grimm fall finale and NBC is celebrating with back-to-back episodes.

Hour 2 — Synopsis for “Twelve Days of Krampus” –Â  After a string of delinquent teens go missing, an old Wesen tale of an evil Santa who brings more than just a lump of coal may be the prime suspect. The investigation intensifies as Nick (David Giuntoli) and Hank (Russell Hornsby) take things a little too far. Meanwhile, Monroe (Silas Weir Mitchell) enlists Juliet (Bitsie Tulloch) to surprise Rosalee (Bree Turner) for their first Christmas together with unintended results. Elsewhere, Captain RenardÃ­s (Sasha Roiz) tour of Europe brings him closer to tracking down Adalind (Claire Coffee).

7 reasons to get excited for the 2-hour fall finale:

[WARNING: Mild spoilers for Grimm‘s second half of season three]

On continually Grimm-ing up fairytales and legends

DAVID GIUNTOLI:Â I think the thing that kind of throws a curve ball into what the audience is expecting is good for the show. I think that what weâ€™ve done on Grimm is originally I was passed a book that had all these fairy tales in it, and that was what our episodes were based on.Â But as the show grows, as does the character Nick, and you discover that some of these other phenomena that take place in the world havenâ€™t yet been added to the book of fairy tales, but they are being added by Nick now. So we are taking other myths and folklore and otherwise just kind of stories that have been told and putting the little Grimm spin behind them now, so I enjoy that.

DAVID: Thereâ€™s an actual legend of Krampus out there, and weâ€™ve had German people asking us to do Krampus over and over again, and we finally tipped our hat to the fine people of Bavaria and weâ€™re bringing this legend to life. We ruin Christmas for everybody and itâ€™s gory and itâ€™s wonderful.

On the evolution of the monsters Nick faces week after week

DAVID: Our showâ€™s much like Mario Bros. But just like every level, they just get stronger, and stronger, and stronger, so obviously season three I’m dealing with some over-the-top, you know, resilient ruthless Wesen.Â Krampus is pretty wild. That guy. I mean he was – when I walked onto set and I saw the actor dressed – I mean first of all, we hired a gigantic guy to play this character. And then when I saw him as Santa with these horns, I actually had like a visceral reaction to him. I was kind of frightened in a way. It was a disturbing thing.

DAVID:Â Weâ€™re going to be playing on this one for a little while.Â There – itâ€™s like funny. Every time Nick gets harmed, heâ€™s left with this kind of useful side effect and weâ€™re going to definitely be seeing more of that after the break.

DAVID: The writers have done a very good job of this – what I like to call the slow reveal. You know, we have I would say coming towards the end of the mid-season – we still have probably two or three contenders for the villain. One definitely – we have kind of a new character that emerges who is one of the I’d say two villains, but we have a new character who is one of the greater villains that weâ€™re going to have on the show.Â But I still place the Captain as a possible villain, and definitely Adalind as a villain, and then thereâ€™s one more guy whoâ€™s showing up here soon.

On so many people knowing Nick is a Grimm

DAVID:Â I think the show is better for having several more people know about Nick being a Grimm. There are still some people in the dark that I donâ€™t want it to be revealed to just yet. The show can never become a big happy family. There needs to be a lot of problems – there are responsibilities and dangers that come with knowing about this world, and those who have found out who are not either Wesen or Grimm, there are dangers that come with that, and thatâ€™s going to be explored in this season.Â And, thereâ€™s a reason Nick doesnâ€™t tell everybody. Itâ€™s not safer for me, the more standard, normal human beings that know about this. But, I am happy that a couple more characters are in this circle, so to speak. I think it opens up a lot of new character dynamics. Different people who can interact with each other for the first time. And I love those big dinner scenes where weâ€™re looking at gory, bloody pictures and drinking red wine and kind of discussing it from all these different points of views.

It’s Friday the 13th — the perfect day to catch a double dose of Grimm. The actionÂ gets underway tonight at 9/8c on NBC.