Dancing with the Stars “Season 17 Week 7” 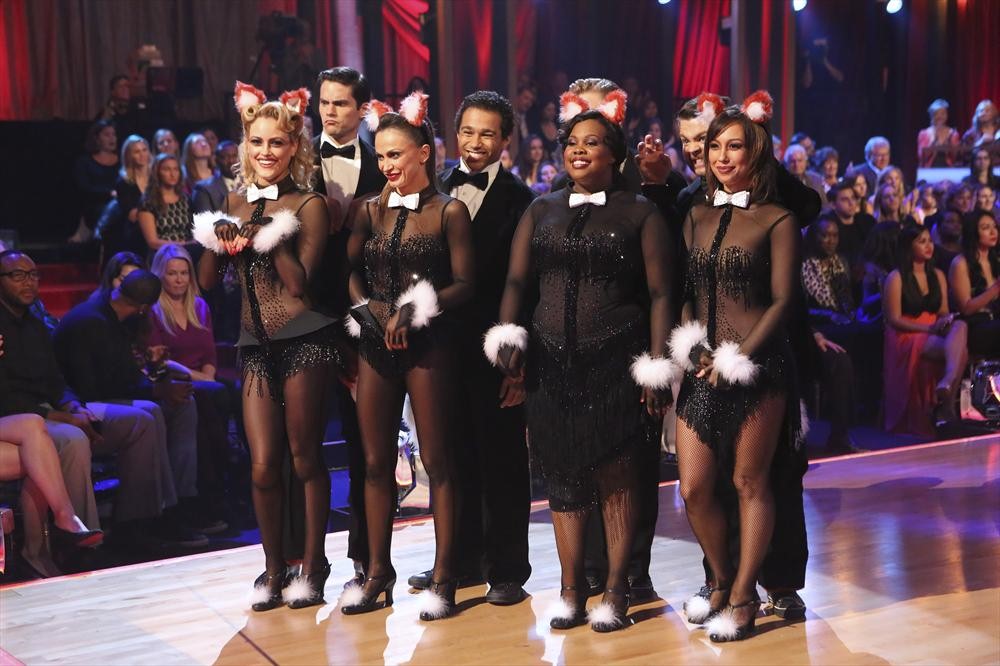 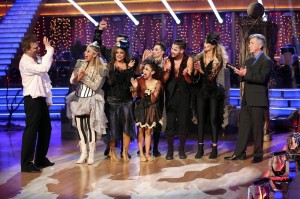 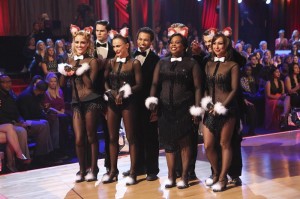 Week 7 — it’s time for group dances. But before any of the performances started, Tom had an amazing announcement. Next Monday, Len won’t be around to judge. Taking his place as guest judgeâ€¦..wait for itâ€¦.CHER! Â It will be amazeballs!Â  I know you are excited but, right now, we need to discuss this weekâ€™s show. Remember, no one went home last week. Turns out, there wasn’t a double elimination, but someone was leaving.

Let me just say this:Â  What was going on with Carrie Ann last night?Â  She was a little loopy! Â She said she had an espresso before the show but I think it was more like four or five!

Okay, I have to say that I wasnâ€™t a fan of the UFO thing in the beginning. (Wait, am I turning into Len?)Â  But of course they did a great job because they always do.Â  Obviously, they had to be feeling the pressure since they got a perfect score last week.Â  Elizabeth had the politically correct answer and Val owned that he felt the pressure.Â  Those Chmerkovskiy brothers are honest!

I thought it was a cute dance.Â  They smashed ice cream in each otherâ€™s faces and just had a good time!

Leah knows how to shake it! Now what we didnâ€™t know before the dance was that Leah had injured her ribs.Â  Tony gave her a compliment that she always perseveres.

It was a rough week for Jack.Â  Because of his disease sometimes he gets tired faster, but he made it work and even got a 10! Â The 10 was from Carrie Ann who wasnâ€™t quite herself last night.Â  She even broke the 10 paddle!Â  Iâ€™ll have what sheâ€™s having.

Of course Jackâ€™s parents, wife and daughter were in the audience to cheer him on.Â  You have to love those Osbournes.

Before the show last night I was reading that Derek might not dance because of a back injury. That made me nervous.Â  When they showed the video package before the performance, not only was Derek having issues, Amber was having trouble with her knee.Â  Knowing all that, they came out and gave a phenomenal performance.Â  Iâ€™m a little miffed with Bruno.Â  He should have given the 10â€¦..just sayingâ€¦.

Letâ€™s all admit we like Bill and Emma.Â  One of the things that Carrie Ann pointed out was that Billâ€™s hold wasnâ€™t strong enough to sustain the dance.Â  He did get all of the steps but the hold is the core of the dance.Â  People booed but she really was giving constructive criticism, which I think is important.

Snooki also had a difficult week.Â  She is flying to and from New York.Â  Her son had a fever and she is exhausted.Â  She was having a very hard time getting the steps.Â  The dance was great even though she said she danced like a turtle. Obviously the judges disagreed with her.

Can you say redemption?Â  After last week Corbin came back with a vengeance!Â  We know the boy can dance and he was on fire!

This week the couples were split into two groups for the annual team dances.Â  The cool thing was they got to do anything they want.Â  Freestyle! I didnâ€™t realize this but Derek has a winning streak with the group dances:Â  He has never lost one!Â  No pressure.

Tom did let everyone know that based on all the scores and votes so far; someone from Team Spooky Bom Bom was going home.Â  But that could change after the dance!Â  The scores for the team dances would be added to their individual scores.

Elizabeth and Val, Snooki and Sasha, Bill and Emma, Leah and Tony

I think they came out and did a great job.Â  It was a cute concept and definitely used their strengths.

Amber and Derek, Corbin and Karina, Brant and Peta, Jack and Cheryl

This was pretty amazing!Â  Corbin really got to show his stuff since it was free style.Â  When everyone was together it was in perfect sync!Â  And the judges agreed by giving them a perfect score!

Tom then announced that everyone was safe on Team Foxing Awesome!Â  No surprise there.Â  The votes came down to Bill and Emma and Snooki and Sasha.

Now based on the scores it looked like Bill was going home, but no, it was Snooki and Sasha! Talk about an OMG moment! (My friend wanted me to make sure I stressed that it was an OMG moment)Â  Snooki didnâ€™t take this well and was crying and said that she wished she didnâ€™t leave looking like a Zombie.Â Â  I think most people found the new Snooki very together but still entertaining.Â  Now go get some sleep!

Dancing with the Stars airs Monday nights at 8pm on ABC.

Face Off "Flights of Fantasy"

Will Makes Alicia An Offer She Can Refuse, The Good Wife “A Precious Commodity”

Lucifer is In It “Til Death Do Us Part”