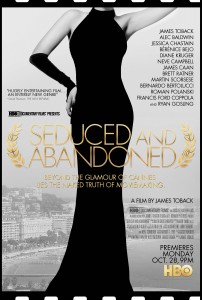 â€œThe movie business is the worst lover youâ€™ve ever had in the sense that you are seduced and abandoned over and over again.â€ — Alec Baldwin

For ten days in May 2012, director James Toback and actor Alec Baldwin worked their way through the Cannes Film Festival in an attempt to secure financing for a proposed film project, a political-erotic Middle Eastern adventure inspired by Bernardo Bertolucciâ€™s classic Last Tango in Paris. As they dashed around â€“ hopeful against all odds â€“ Toback filmed the hilarious and revealing proceedings, from pitches to billionaires, studio moguls, producers and international sales financiers, to intimate encounters with major movie stars and iconic directors whose passion for movies proves itâ€™s still possible to transcend the madness.

What compromises will they have to make? Who will they convince to give them money? What do their colleagues – both directors and actors – have to add to the mix? And will they be able to make the film they want to make?

Plot Twist: Carol is outed as the Killer, The Walking Dead "Isolation"