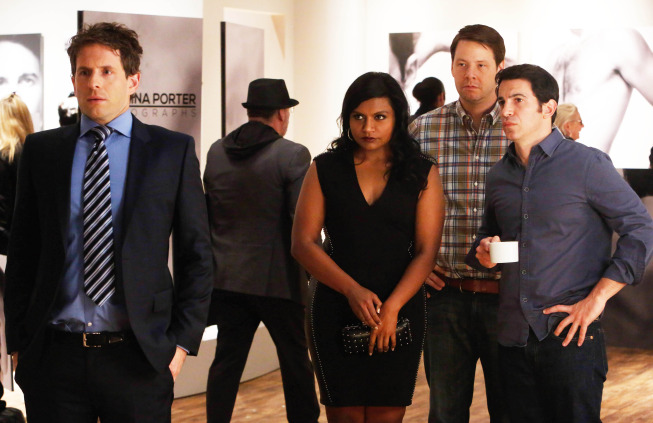 Photo Credit: Jordin Althaus/FOX
More great comedy moments happened this week. My top three:
ComedyÂ Corner Moment #1: The Crazy Ones Blooper Reel in “Breakfast Burrito Club”
Let’s start this article with a question. How many of you have sat in a movie theater, watching the credits roll by, afraid to get up because you might miss the blooper reel at the end? I’ll admit it. I’ve done it. Many times. I’ve watched the crew names. The composers. Even the locations and all the way until the lights come up to make sure I haven’t missed it. I don’t know what it is about bloopers that fascinate and compel us – maybe it’s seeing the actors out of character, maybe it’s seeing that these gorgeous people on the screen aren’t perfect or maybe its just because we like to laugh – but regardless, those can be some of my favorite moments.
The same can be said for TV shows. I honestly find myself devastated when a show doesn’t have a blooper reel on the DVD. That being said, I love that The Crazy Ones doesn’t make us wait for the DVD, but rather gives us a mini-blooper reel at the end of the every episode. Granted, this isn’t the first show to do so (see Psych‘s Psych Outs for some laugh out loud faux pas), but when you have Robin Williams at the helm of your show, you know you’re bound to get some wacky, nutty and downright bizarre moments and I love that they are willing to share these with us.
Most comedies will put a button or final quick scene at the end, but these outtakes trump any scripted gimmick in my opinion. It’s the unplanned, unexpected slip-ups and stumbles that show us that the cast is having fun and when it comes to the real show, that makes all the difference. So thank you to The Crazy Ones for giving us a glimpse behind the scenes. And rest assured, when the DVD comes out, we’ll be anxious for more. The outtakes from the most recent Crazy Ones:
The Crazy Ones airs Thursdays at 9/8c on CBS.
Comedy Corner Moment #2: Brooklyn Nine-Nine Goes for Revenge in “The Vulture”
This show often toes the line between silly and silly verging on ridiculous. Sometimes that leaves us laughing at things that we aren’t really sure why we’re laughing at. And this is one of those times. In an attempt to get back at an arrogant agent from Major Crimes who has repeatedly stole their cases, the detectives of the Nine-Nine gather at aÂ bar toÂ throw out their plan revenge plans.

Boyles: “What if you called him from a hospital and said his whole family is dead?”
Peralta: “Like they died of cancer. Charles, that is so dark. I’m puttin’ it down.”
Boyles: “What if we wrap his motorcycle in plastic wrap and melt it with a hair dryer? A little trick I learned in gift basket-making class.”
Peralta: “Alright, here’s what we’re up to. Steal his kidney. Burn down his house. Replace his aloe tissues with regular tissues. Thank you, Charles. Leave a dead cat in his cedar closet. Note, he would have to own a cedar closet.”
Diaz: “He seems like he would.”
Peralta: “Sneak in to his apartment and burn popcorn in his microwave. Thank you, Charles. Uh, Scully asked for mashed potatos so I wrote that down. Well, I hate to say it but I think by default, Charles’ motorcycle idea is the winner.”

Low and behold, they went with the motorcycle in saran wrap and while their plan came to a standstill when no one had a hairdryer, seeing a motorcycle in saran wrap still made me laugh. It probably had something to do with the whole squad standing in an alley, slightly drunk and hell-bent on revenge, but nevertheless, it was just as funny as it was ridiculous.
Congrats on Brooklyn Nine-Nine getting a full season pick-up. The comedy airs on FOX Tuesdays at 8:30/7:30c.
Comedy Corner Moment #3: Mindy Speaks Her Mind (Again) inÂ The Mindy Project “Wiener Night”
It should come as no surprise that I love the way Mindy talks. To her patients. To her boyfriends. To children. To everyone. She is so frank and honest and well-intentioned that her potentially self-centered and absurd remarks come off as hilarious. And this week, Mindy took center stage at Christina’s art exhibit, which conveniently featured Danny. In the nude. After viewing Christina’s attack on Danny, Mindy decides to stand up for him…and herself.

This obviously leads to Danny stripping, cops arriving and a song from another Mindy boyfriend that I started off not liking but potentially won me over in the end. Mindy is honest, confident and when it comes to speaking her mind, she does not hold back. What more could you ask for?
The Mindy Project airs Tuesdays on FOX at 9:30/8:30c.
Tags #Breakfast Burrito Club #Brooklyn Nine-Nine #Cortney Persiani #Cortney's Comedy Corner #The Crazy Ones #The Mindy Project #The Vulture #Wiener Night
Previous

The White Queen "The Final Battle"