I don’t know about you guys, but I feel like NBC’s Revolution is getting better as the season continues. Tonight is an episode that’s definitely my favorite one so far. It’s beyond intense.

Revolution creator Eric Kripke addressed reuniting the characters and much more in a recent Q&A with reporters/writers/bloggers. Here’s some of what we found out:

ERIC KRIPKE: I was really pleased. I feel like the response is exactly what we wanted it to be which was boy, it felt like the show got back to basics and got back to a reality in a really positive way. So I was very gratified. It felt like a lot of what we were working to do behind the scenes to get across, came across. Hopefully.

ERIC: For the short term…with the exception of Jason and Neville. Although, ultimately, for the whole season they’ll be folded back in — but not for a long time because we’re really enjoying their story as they’re delving deeper and deeper into our Patriots. But for the others — the Mathesons — if we had a thematic this season, it was that the events of the finale shattered everybody and everything proverbially and literally and so now we have these shards of people who are smashed and strewn across the world across the continent and yet but slowly but surely they have to find each other again.

These little flares of light have to find each other in the darkness and if they can reunite, if this shattered family can reunite and overcome their issues and become whole again, then they have a chance at winning. So, for us, it’s always at its core. When we’re in the writers room, I always say to them: ‘Okay but what’s the family story?’ And that’s where we begin. It’s not about the action — I mean it’s all wonderful. It’s not about the spectacle. The action, as brilliantly as our team pulls it off, it’s about what’s the emotion and the heart of it. Which I hope separates us from a lot of genre shows — we have kind of a unique focus on making sure there’s a lot of heart in every episode and hopefully that comes across.

On whether Monroe is on the road to redemption

ERIC: I think Monroe’s going to twist and turn. We don’t ever want to — it’s a mistake to defang him. He should never be entirely trustworthy. I think right now he finds himself with a shared enemy with Miles and the gang. And he’s got this deep sibling bond with Miles. I think all that is part of who he is genuinely. I think he genuinely wants to stop the Patriots. I think he genuinely feels stronger when Miles is fighting beside him. All that being said I think he is who he is.

ERIC: There will be the son. He will be in this season. It’s happening. We don’t have him cast yet but he will be a character and a recurring one.

On approaching the show differently in season two versus season one

ERIC: We really looked hard at creating something that still gave us tension and intrigue and adventure and reset the chess board back to a world without power because that’s, I think, what people really relate to and I think that was the hook of the show and we gave up our own hook in first season, which I don’t suggest. But I’m glad that we found it and we got back to a much more realistic, grittier version of what the world would be. And I think all of those things — settling our characters down in one town, getting to know certain characters, letting things evolve and play out, keeping things tense but not so tense that you can’t have a conversation about how you feel — and then we can get to know who these characters are.

On moving production from Wilmington, N.C. to Austin, Texas

ERIC: I miss my team in Wilmington. They were wonderful. And they worked heroic hours. And did great work butâ€¦it gave us this opportunity because we have a lot of new team members who were coming to the show with a fresh eye. And you could have a lot of long production conversations about everyone’s looking too clean. They’re showering too much. They should have dirt on their face. Where the f–k are they getting that conditioner. And we can reflect that into the show and then also into the production design which is how do we make it filthier and more layered. When you’re in one town you can really layer it and make it very interesting and weathered because you’re spending time in one place. When you’re moving from city to city it’s hard to mount as lived in a world as we’ve been able to create this season. So it all serves story and production to create a reality that I think I hope — because I’m as proud of the beginning of this season as anything I’ve done — and I hope the audience sees that we’re really working hard to improve it and create a very credible world.

Kripke talks about the mysterious Patriots tomorrow on TV Goodness. So check back here then.

And tune into a new RevolutionÂ tonight at 8/7c on NBC. 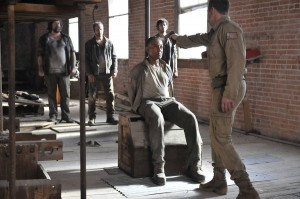 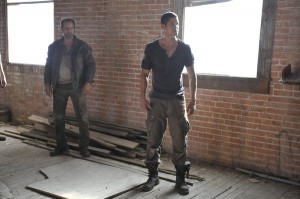 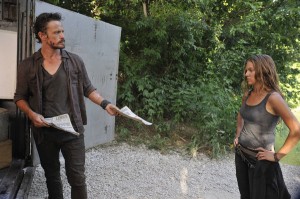 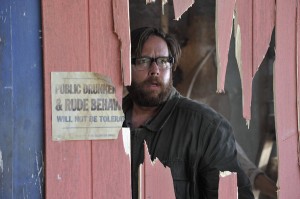 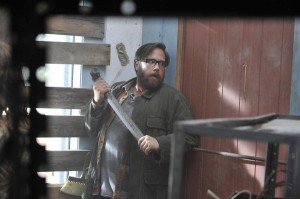 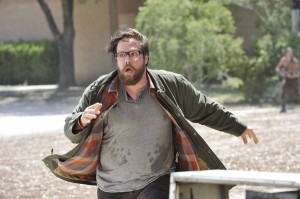 Nashville "I Don't Wanna Talk About It Now"

What They Said: Favorite Quotes From New Girl "The Captain"