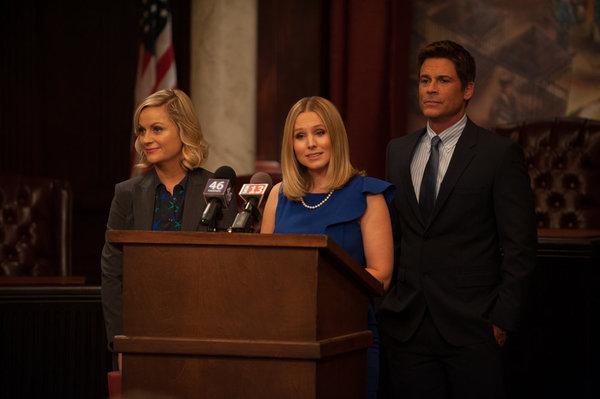 Welcome back to Comedy Corner!

Without further ado, letâ€™s take a look at my favorite moments from this week (Sept. 30):

Iâ€™ll be honest, I donâ€™t actually watch this showâ€¦Iâ€™ve been meaning to, Iâ€™ve wanted to, but I havenâ€™t had a chance to jump on the Parks and Rec bandwagon quite yet. That being said, any time you put Kristen Bell on as a guest star, youâ€™ve got my attention. Kristenâ€™s role as Ingrid de Forest, City Counselor from uppity Eagleton, was a fantastic foil to charming but often inept Leslie Knope. From filling Eagletonâ€™s pools with bottled water to purchasing HBO for the whole town, Bell brought a warm snootiness to the character that you couldnâ€™t help but likeâ€¦even when she bet Pawnee $7000 Swarovski crystal oranges in exchange for their worm infested apples. It may not be fair to compare apples and oranges, but nevertheless, I love watching these two face off and I plan to tune in for Kristenâ€™s return next week.

Parks and Rec airs Thursdays at 8/7c on NBC.

I canâ€™t help it, every time this lanky, uncoordinated bartender tries to dance, it cracks me up. Weâ€™ve seen him chicken dance, panic moonwalk, cricket leap and even rock out to Taylor Swift so I was obviously pleased to see him break out his moves again this week. The man has no coordination, no grace and no sense of rhythm, but that doesnâ€™t stop him from going all out. While his attempt to distract Jess and Schmidt from their argument was unsuccessful, his â€œdance to make everyone happyâ€ was a sure-fire success in my book. And anytime Nick Miller wants to flail his arms and legs, leap like a leprechaun or imitate a marionette in an explosion (that was what that last move was, right?) Iâ€™m definitely on board.

Yes, it was predictable and yes it was a comedy clichÃ©, but that didnâ€™t stop me from laughing at Kateâ€™s repeated attempts (and missteps) at being a mother figure. A character like this could potentially be found annoying in her attempts to fit in to the family, but Malin Akerman does it with such heart and such genuine sincerity, that you canâ€™t help but adore her. It was obvious her attempt to read Bert to sleep and play a misguided game of â€œthis little piggyâ€ was not going to be that easy (although watching her crab crawl out of his bedroom certainly put a smile on my face) but it was the mess that spiraled afterwards that had me hooked. From trying to get Bert to fall asleep while watching tv to giving him coffee the next morning to wake him up (since the tv watching had failed to put him to sleep but instead taught him the word â€œuterusâ€), the way Akerman played the character may have seemed desperate and irresponsible, but it was also honest. I donâ€™t have kids of my own, but in talking to a friend (who shall remain nameless), she admits to having resorted to similar tactics and even waking to find her daughter had a whole new wealth of knowledge thanks to late night tv. That being said, Kate stuck to her guns, trying to rev up Bert on the soccer field when the caffeine wore off and eventually accidentally hitting Bert with the soccer ball in a place he now calls â€œhis uterusâ€. But despite the disasters, when Bert called her in at the end to hear more about the little piggyâ€™s going to the Hamptons and getting a tongue piercing (not quite the same as going to market and eating roast beef), it was obvious that Kate is not only a Trophy Wife, but also a five-star step-mom.

Moment of Goodness: Jennifer and Lexie Find a Door, Haven "Lost and Found"

Norma Admits Her Truth to Romero in Bates Motel “The Vault”