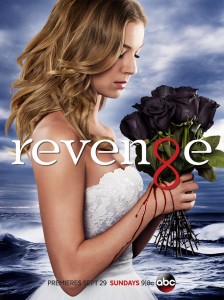 The show starts with Emily in a wedding dress on a boat and then looks at someone and says, â€œIâ€™m sorry.â€Â  And then she is shot two times and goes overboard.Â  Then we hit rewind to two months ago and you see Daniel and Emily hanging out by the pool in Manhattan. Can anyone say whiplash?

Well it just means one thing: Revenge is back!Â  So hereâ€™s what we know:

-Six months have passed since Emily told Jack that she really is Amanda Clarke. Jack left the Hamptons right after that to take Carl to meet his extended family.

-Emily and Daniel are together and engaged.

-Daniel is unemployed because of the implosion and explosion of Grayson Global.

-Daniel is sitting at a bar in the city and bumps into a woman he knows from his past named Margaux LeMarchal and is also a guest at the Memorial Day Party. (You know she is bad news!)

-Nolan is released from jail after being exonerated.Â  There is no more Carrion or the Initiative.Â  (I think we are happy about that!)

-Emily picks up Nolan and then takes him to a house that she has bought for him.Â  Itâ€™s not far from her Hamptonâ€™s house.

-Conrad is still Governor and Emily takes on throwing the Memorial Day party that was always thrown by Victoria.Â  A portrait will be revealed at the party. (Sounds boring but it isnâ€™t)

-Victoria and her son Patrick (played by Justin Hartley) have spent the last 6 months getting to know each other.Â  He seems to bring out the best in her. (We all know that there is more to this guy then meets the eye.Â  And he is cute!)

-Emily finds out that Jack is back and goes to see him. He will keep her secret.Â  He kisses her and then says he doesnâ€™t feel anything and to stay away from him and baby Carl.Â  But when we see his face he is far from not feeling anything. (Poor Jack!)

-Charlotte has been in Europe and after losing Declan and their baby she has gone through a change. She seems more sure of herself and ready to deal with whatever comes to her. Charlotte goes to meet her new brother, Patrick.Â  She makes it known that he needs to suffer like the rest of Victoriaâ€™s kids.

-Patrick tells Victoria that he needs to go.Â  He is a freelance painter and needs to do some work.Â  But she knows something is up.Â  She finds out that Charlotte spoke to Patrick.

-Conrad comes back to Grayson Manor and tells Victoria that he is putting the house on the market.

-Ashley tries to blackmail Emily into giving her money.Â  She needs to meet a â€œwell-off â€œguy and to be invited to the big Memorial Day Party. (I mean really, who doesnâ€™t need to meet a well-off guy?)

-Emily goes to Victoria and says Ashley’s trying to blackmail the family about all the stuff she knows. She gets Victoria to agree to come to the party.

-Emily is obviously planning something for this big shindig, but Conrad wants the security to be amped up.Â  Emily asks Nolan to hack into the security system so she can get what she needs into the party.Â  He informs her that he is not hacking for awhile, since that’s what landed him in jail.Â  He promises her he will get what she needs past security.

-At the party, Emily introduces Ashley to a good looking doctor.Â  They seem to hit it off.

-Conrad takes some water from Emily since Nolanâ€™s entry to the party had him a little freak. (Poor dumb, Conrad)

-Emily presents Conradâ€™s portrait to the party and then has Conrad come up to say a few things.Â  But suddenly Conrad passes out. (Guess what was in the water!)

– At the hospital, the doctor that Emily introduced to Ashley comes into Conradâ€™s room to tell him he has Huntingtonâ€™s disease. This is a progressive and fatal disease. (Oh, yeah.Â  And Emily was able to switch the results on the doctorâ€™s computer so Conrad isnâ€™t really dying.)

-Then the press is outside of the hospital and Daniel gives them an update but doesnâ€™t reveal Conradâ€™s diagnosis.Â  But somehow within minutes of the family finding out, the press finds out how sick Conrad actually is.

-Emily blames Ashley since the doctor might have said something casually to her.Â  (We know it wasnâ€™t Ashley, but well done, Emily.)

-Emily and Victoria meet Ashley at a private airport and inform her she is leaving and never coming back. (Well we knew she was leaving already so nice send off for the character.Â  But I feel like she is going to back at some point.Â  But thatâ€™s just a guess.)

-Jack shows up at Emilyâ€™s house and says he knows that what happened to Conrad is her fault.Â  He needs her to wrap up her revenge by the end of the summer or he will tell people who she really is. (Jack, I know you are mad, but you were going to kill the guy yourself. Just saying.)

– (BIG SPOILER!)Â  As Victoria walks into her room she sees the back of a male figure on her balcony.Â  She thinks its Patrick, but surprise, itâ€™s Aiden! And he wants revenge on Emily! (Aiden, how could you!)

Um, I think Revenge is back in a big way and I canâ€™t wait to see what is coming up.Â  What do you think about this turn of events?Â  Who shoots Emily? (J.R. Ewing would be so proud!)Â  See you next week.

Guest Star Goodness: The Good Wife "Everything is Ending"