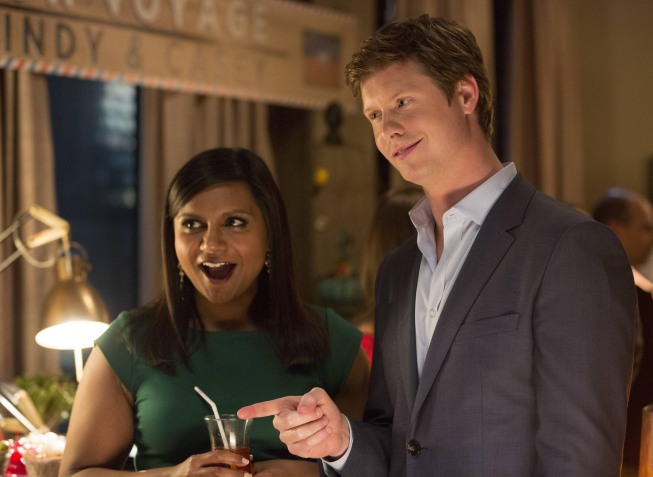 [Cortney’s Comedy Corner is a new feature on TV Goodness]

I’m here to talk all things comedy and sitcom-related now that Fall TV has officially started. A few of my favorite moments from the week of Sept. 23:

One of my most favorite comedy relationships on TV right now is without a doubt Mindy and Casey. Iâ€™ll admit I was not a Casey fan when he first appeared, but the dynamic that these two have developed is more than I couldâ€™ve ever asked for. From the premiereâ€™s almost-wedding to his discovery of her coveted anti-dandruff shampoo, Casey just gets Mindyâ€¦like REALLY GETS her. Loved in this episode when the couple tries to keep their long distance relationship steamy with some skype sexy timeâ€¦Mindy decides to channel Varsity Blues, but due to potential NSA spies, goes for her own more modest version of the whipped cream bikini. Their whole awkward conversation ranged from Edward Snowden to Mindyâ€™s strategic placement of a gummy bear and I loved every second of it. These two are by far my favorite part of the show and I plan to be thoroughly devastated when they inevitable break up.

Favorite Comedy Moment #2: Mike takes on eggs on NBC’sÂ The Michael J. Fox Show
So I wonâ€™t say that I absolutely loved everything about this show, but I will say that I have nothing but respect and admiration for the approach that it takes. Michael J. Fox does such a phenomenal job of turning something so difficult in to something so human. People with Parkinsonâ€™s may face challenges, they are still husbands, wives, parents, and employees and as Michael shows, life continues on. His ability to be self-deprecating and poke fun at himself just makes me like him all the more. The scene that really got me in the premiere (even though Iâ€™ve seen it a hundred times in the promos) was the egg scene. The fact that his family treats him and his battle with Parkinsonâ€™s as so normal, no kid gloves, no overly sensitive PC-ing, is refreshing to see on TV. And what made this â€œweâ€™re too hungry for personal victoriesâ€ scene all the better was that Fox admitted in an interview that this scenario (and many others including the 9-1-1 misdial) are based on his real life. The fact that he can see the humor in his situation and wants to let audiences know its okay to laugh too is one of the many reasons that I hope this show succeeds.
The Michael J. Fox Show airs on NBC Thursdays at 9:30/8:30c.
Â
Favorite Comedy Moment #3: The Entire Pilot for ABC’s Trophy Wife

Ok, so this isnâ€™t so much a â€œmomentâ€ as a whole 22 minutes of moments. I went in to this show with very low expectations; however, it is easily one of my favorite sitcom pilots of the fall. From Kateâ€™s meet cute with her husband to Bertâ€™s car door stand-off for a toy store visit, this show made me laugh not only the first, but also the second time I watched it.Â  Malin Ackerman does an excellent job of carrying this show as the much-younger third wife, making the character ditzy but also intelligent, good-hearted and likeable. She genuinely tries to fulfill her new role as step-mom and although she sometimes falters, she also delivers. And not to mention, she is darn funny while doing it. I loved watching her chug a full water bottle of vodka to protect her step-daughter and even in the end of the episode when she is hilariously drunk as a skunk (a state which is often portrayed in an annoying and overly-stereotypical way), I couldnâ€™t help but laughâ€¦her shock and awe at the situation seemed nothing but genuine. I am definitely on board for this show and can only hope it continues to earn itself a place on the podium. Â
Trophy Wife airs on ABC Tuesdays at 9:30/8:30c.
Tags #ABC #Cortney Persiani #Cortney's Comedy Corner #Fox #Malin Ackerman #Michael J. Fox #Mindy Kaling #NBC #The Michael J. Fox Show #The Mindy Project #Trophy Wife
Previous

The Amazing Race Season Premiere Preview: "We're Not In Oklahoma No More" [VIDEO and PHOTOS]

The Walking Dead “Start to Finish”