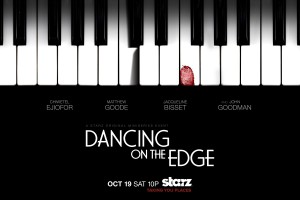 Starz is about to air a new mini-series I am dying to see. They’re actually calling it an “original mini-series event” and I really wish it had a start date of tomorrow. Seriously. I’d definitely consider what I’m feeling right about now a premature infatuation.

Show: Dancing on the Edge
Network: Starz
Official Synopsis: Inspired by true accounts of the phenomenal Duke Ellington Band mingling with the future Duke of Windsor Edward VIII in Europe, Dancing on the EdgeÂ takes place in London during the early 1930s.Â The storyÂ illustrates the journey of a group of Black jazz musicians â€“ the Louis Lester Band â€“ as they steadily rise to stardom, a result of performing at various elite social gatherings hosted by Londonâ€™s aristocrats. Although Britainâ€™s climate was flourishing with extraordinary social change, much of the upper-class loathed the idea of Black musicians performing in polite society. Still, the cityâ€™s more progressive socialites (including members of the Royal Household) befriend the ensemble and introduce them to posh life. The blissful eminence surrounding the band abruptly changes when the band members are entangled in a murder conspiracy.

This five-episode mini-series already aired on the BBC Â and received strong reviews and ratings.Â What’s hooking me so far are two things: the concept and the cast. I really want to see what this jazz band had to deal with back in the ’30s in London. This period drama will hopefully be equal parts exciting, heartbreaking, romantic, musical, turbulent and fascinating. And I can’t wait to see these actors bring this story to life. Some of those involved in this project:Â Chiwetel Ejiofor (Love Actually, Serenity, Children of Men); Matthew Goode (Match Point, A Single Man, Watchmen), Angel Coulby (The Tunnel, Queen Guinevere from Merlin), John Goodman (Roseanne, Argo), Jacqueline Bisset (Airport, Bullitt, Class) and Anthony Head (Buffy the Vampire Slayer, Manchild, Merlin — he was Arthur’s dad, Uther Pendragon).

Chiwetel is a force of nature when it comes to acting, he is so good. He blew me away with his performance in Serenity, which is the first time I had really taken notice of him. I’m also looking forward to seeing — and especially hearing — Angel Coulby. She plays the lead singer of the jazz band and, according to the Starz press release, she and fellowÂ Dancing actress Wunmi Mosaku (I am Slave, The Body Farm) “both lend their extraordinary, authentic vocals to perform the original soundtrack.” Yup, I’m on board for sure.

The U.S. television debut for Dancing on the Edge happens on Saturday, Oct. 19 at 10/9c on Starz and then continues airing on the following Saturdays at 9/8c.

The Newsroom "One Step Too Many"