Anna NicoleÂ follows the swift rise and fall of Vickie Lynn Hogan, a Texas high school dropout and single mother with dreams of a better life.Â  Realizing the power of her beauty, Vickie accepts a job as a dancer at topless bar, where she changes her name to Anna Nicole Smith and first makes her mark.Â  With a new persona and a shocking marriage to octogenarian millionaire J. Howard Marshall, Annaâ€™s career blasts off whenÂ Playboyfeatures her in a pictorial spread that evokes comparisons to Marilyn Monroe. Â But after her husbandâ€™s death, Annaâ€™s financial support ends and her hard-partying ways, excessive drinking, drastic weight fluctuation and endless pill-popping take their toll, inevitably setting the stage for the fading starletâ€™s tragic descent. 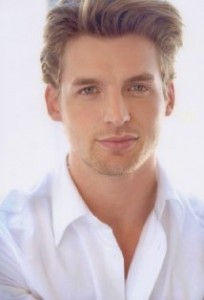 You might not know Donny Boaz by name but you probably have seen him somewhere before.Â  In the movie, â€œAnna Nicole,â€ he plays Larry Birkhead, the father of Anna Nicole Smithâ€™s little girl, Dannielynn.Â  As Donny and I spoke, the first thing I knew was that he was a lovely person.Â  I also realized that here was someone that was so happy to be a part of this movie and be an actor.Â  â€œWhat I realized being in this film was that Larry was not a big part of Anna Nicoleâ€™s life when she was alive, but afterwards.â€Â  If you donâ€™t know the story, Larry went to court with Howard K. Stern, Annaâ€™s constant companion and lawyer over the paternity of Dannilyn. â€œLarry was the winner of the paternity test,â€ Donny said.Â  Â Larry Birkhead wasnâ€™t involved with the project, but he did reach out to Donny. â€œI was having lunch with my mom when I got a tweet from Larry Birkhead, congratulating me for getting the part.â€Â Â  He had barely found out himself and thanked Larry.Â  Whatâ€™s also ironic is that Donny and Larry still have never met. Â Â Larry thought it would be great if they could meet up sometime and have a beer. Â As Donny was telling me that he had gotten the part by putting himself on tape.Â  It was then a very quick turnaround when Donny got the job, so he didnâ€™t have time to do a lot of research.Â  But thanks to Google, he found as much as he could as Larry.

Donny was playing college football and also working as a personal trainer when one of his clients thought he should be a model.Â  He didnâ€™t think much of it at first but ended up modeling all over the world for a few years.Â  When he was back in the states, he got into acting. The first role he auditions for was the TV movie, Saving Jessica Lynch. Â One of the highlights for him was after the movie aired, the man he portrayed, Pfc. Patrick Miller, contacted him and told Donny what a great job he did. Not only is difficult to play the part of a real person, but that person is still alive.Â  To get that kind of acknowledgement is an amazing thing, especially on a first role.Â  Â Now he gets teased because he keeps getting these bio pictures with people that are still alive. Â Â You will be able to see Donny soon as Bill Diggins, the manager of the R&B group TLC in the movie: Crazy, Sexy, Cool: The TLC Story.Â  In fact Bill Diggins told him, â€œYou know that we are now tied together for life.â€Â  And now he will be tied to Larry Birkhead for life as well.Â  Hopefully they will be able to have that beer soon.

Some other projects you might have spotted Donny in are: All My Children, Guiding Light, GCB, and The Great Debaters. â€œLast year I was on the road for 300 days, doing 18 films.â€Â  How crazy is that? Donny says that what is so great about being an actor is you get to try so many different things.Â  If you look at his whole resume, he really hasnâ€™t stopped working from the moment he booked his first job.

I asked Donny what he watches on the television.Â  â€œThe first thing that comes to mind is HBO’sÂ Game of Thrones. Â I would not be surprised if he ends up with a part because he makes sure that all his agents know how much he loves it!Â  He also likes House of Cards and Spartacus.Â  Because of his busy schedule he will usually sit down and binge watch shows.Â  He also tries to take in films so he can study them and help himself continue to be immersed in the business of show.

Anna Nicole premieres on Lifetime at 9/8c. Here are some repeat airings for the movie:

NCIS Preview: “Anonymous Was a Woman” [PHOTOS and VIDEO]