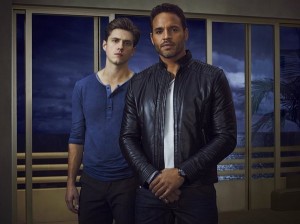 Inspired by true events, Graceland is a refuge for a group of undercover FBI, DEA, and ICE agents. Immersed in fake identities that they must constantly maintain, this house is the one place where these agents can let their guards down. That is, when the roommates don’t have their own secrets they’re working overtime to keep…from each other.

This is a series we don’t mind adding to our already crowded DVR. It’s a bit darker than the normal USA Network show (well, except for Suits) and we’re already liking the cast. The pilot is a good set-up for the series. At this point, we simply need to see how well each of the characters is fleshed out in future episodes.

Right now we have a confession to make. We’re crushing on two of the most spectacular specimens to hit summer TV in a long time: Graceland‘s Daniel Sunjata and Aaron Tveit. Together these hotties are giving us plenty of incentive to stay indoors. And that’s just what we’re going to do. 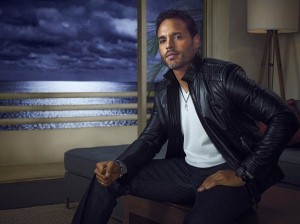 GracelandÂ character: Special Agent Paul Briggs
GracelandÂ assessment: Briggs is a natural born leader even though his past remains top secret. He’s a legendary undercover operative but what he keeps hidden from his fellow agents may be his undoing. What we do know about him is that some sort of event triggered something so big he changed from Mr. Suit and Tie to Mr. Sun and Surf. This Zen transformation happened for a reason. We can’t wait to find out what that reason is. 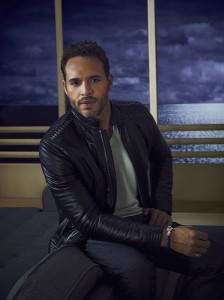 The Crush Factor: We’ve been huge Daniel Sunjata fans since that fateful day he walked across our screens as a sizzling hot sailor on HBO’sÂ Sex and the City. We started appreciating him as so much more than just a pretty face after spending some serious time with him inÂ Rescue Me. We don’t mean to objectify him (ok, yes we do), but have you seen his face? Stunning. He’s tall and you can tell he keeps himself in shape. But equal to that, we love his acting. He can come across as brash and cocky, but also sensitive and vulnerable. We love that kind of talent. And if it comes wrapped in a great looking package, who are we to object? Sunjata is the best part of theÂ GracelandÂ pilot. One can never tell if an actor is going to be able to make that jump from supporting role to lead. In this case, there’s no need to worry. He steps up big time. And he looks gorgeous while doing so. Plus, his character’s a surfer. Let’s just say he sure knows how to look sexy on a surfboard. Need we say more?
Aaron Tveit 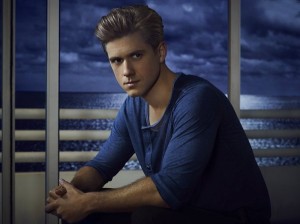 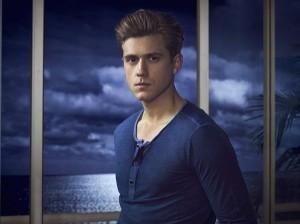 GracelandÂ character: Special Agent Mike Warren
GracelandÂ assessment: Mike Warren’s fresh meat in the Graceland beach house. He just graduated from the FBI and he’s placed in with these seasoned agents from various alphabet organizations. We see this dangerous world through his eyes. He’s got a serious case of hero worship for one Special Agent Briggs but keep your eye out for Warren. He has his own agenda. We’ll have to see if said agenda will clash with this new life he’s living. 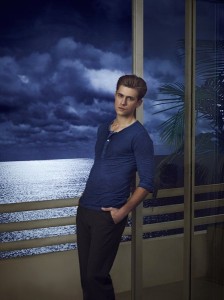 The Crush Factor: After seeing the adorable Aaron in 2012’s Oscar-nominated filmÂ Les Miserables, we knew we were going to have to keep an eye on him. I mean, we love a man who can sing. And we love a man who comes across as such a devoted, passionate person on the big screen. He has a charismatic presence, he’s ridiculously good looking and he’s a multi-talented actor. On top of that, he has a magnificent smile and a body to die for. Basically, he gives us no choice but to notice his perfectly chiseled presence.Â Yes, we’re looking forward to seeing the tasty Tveit and his character in action — in the house, on the beach and running around the streets of L.A. After looking at all the evidence, we totally understand why he was hired to play such an integral role onÂ Graceland.
TheÂ GracelandÂ series premiere airs tonight at 10/9c on USA Network.
ALL PHOTOS CREDITED TO JAMES MINCHIN III/USA NETWORK
Tags #Aaron Tveit #Daniel Sunjata #Graceland #Kara Howland #Les Miserables #Pilot #Rescue Me #Sex and the City #Summer TV Crushes #Thursdays #Tina Charles #USA Network
Previous