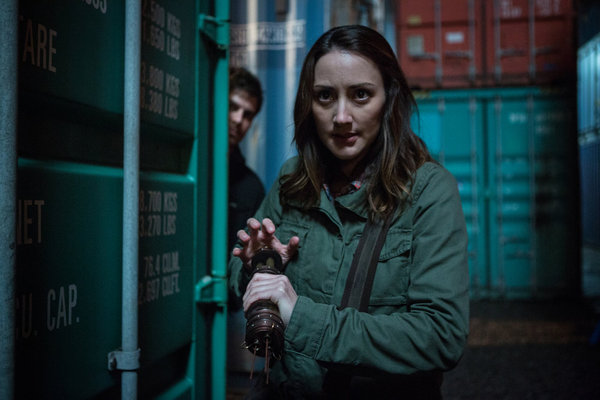 Another Grimm season finale? Time flies when you’re scared…and having fun watching all the Wesens of the Week.

NBC Synopsis for “Goodnight, Sweet Grimm”:Â THE ROYALS BRING THEIR AGENDA FOR NICK TO PORTLAND â€“ JAMES FRAIN AND SHOHREH AGHDASHLOO GUEST STAR — Just when things look like theyâ€™re back to normal with Juliette (Bitsie Tulloch), Nick (David Giuntoli) is called to investigate a flurry of rage-fueled assaults happening all over Portland. He goes to Monroe (Silas Weir Mitchell) and Rosalee (Bree Turner) for help battling Portlandâ€™s newest wave of â€œundead.â€ As if that werenâ€™t enough, Captain Renard (Sasha Roiz) informs Nick that his brother Eric (guest star James Frain) is in town on family business. Meanwhile, Stefania (guest star Shohreh Aghdashloo) and Frau Pech methodically use their alliances with Adalind (Claire Coffee) to battle one another. Russell Hornsby and Reggie Lee also star.

I’m not going to lie. I’m not ready for this to be it. Season 2 has been quite enjoyable.Â What’s been your favorite part? For me, it’s the fact that we’ve been able to see Hank be even more part of the action now that he knows about Nick’s Grimm-ness. It’s been Nick finding out about Renard’s royal ties and the fact that his boss knew all about him, too. They’ve been forced to work together on cases of the Wesen variety. You know that Renard and Nick don’t really trust each other but they also have to be glad that they don’t have to hide anymore, right? Although, there are a still a ton of mysteries they’re keeping from each other. And I’m totally cool with that.Â I love Rosalee and Monroe and how integral they are to the cases Nick investigates. They’re both rock solid support as well as such a cute couple. I can’t get enough of those two.

TV Goodness was able to take part in a recent press call where the actress who plays Rosalee Calvert — Bree Turner — answered questions about the finale, an episode where her character “gets more physically involved in what we’re dealing with…” What else does she have to say about the season ender?

What was your reaction when you first saw the script for the finale?

BREE TURNER: Well, seeing the finale script, it was just truly – I don’t know what more they could have put in this script. I mean everyone – every story line gets blown out and exposed, resolved, challenged. And then just the level of production value in this finale. It’s like feature film-quality stuff that we did in terms of effects and story and set and environment.Â It was all just really at the top of our game, I felt. We were all kind of chomping at the bit to start production on this last one.

BREE: Can I tell you specifics? No. But…someone’s life is definitely in balance and it’s very, very, very scary to be this person, I will say. And I honestly don’t know how we’re going to resolve it in terms of storyline. I’m nervous and excited about how season 3 is going to begin with this cliffhanger because it’s pretty major.

Is there strife ahead for Rosalee and Monroe?

BREE: It’s Grimm, you know. People don’t stay happy very long on this show. And the Rosalee/Monroe romance has been moving in such a beautiful – it’s had such a beautiful journey this season that, I mean, let’s be real. Only complications are coming.

BREE: I think it’s the romance (Rosalee/Monroe) this year. It”s been really fun and it’s been so sweet and it’s so enjoyable working with Silas [Weir Mitchell, Monroe] that I think that the payoff the fans will receive [tonight] will be well worth the wait.

In the future, what would you like to see Rosalee’s role be in the group?

BREE:Â You’ll see [in the finale],Â I become much more the authority in the issue at hand. And I really like that choice like of just…there’s no more bumbling through this now. Now I am — I feel — one of the most powerful apothecaries in the Wesen community. I feel like I’m the one that – I’m such a research nerd and I think that was exposed [in] the “Endangered” episode, when I knew everything about the Wesen/our alien creatures [the Gluhenvolk]Â — that I knew everything about who they were.Â I think I just love research and history and books. And I think I know a little bit about everything honestly. And I think that would be fun to just sort of have kind of complete total world domination in terms of that…in terms of my skill set. I think I am becoming very powerful that way.

Will being this voice of authority get [Rosalee] in trouble in the finale?

BREE:Â Yes. You know, it’s a lot of pressure. And I think everyone sort of is starting to look to me for the answers and I only can do what I can do, you know. So I think, yes, it does get me into trouble with what we’re dealing with.

Nashville Season 1 Finale Preview: "I'll Never Get Out of This World Alive" [PHOTOS]

Previewing Aurora Teagarden: Reunited and It Feels So Deadly