Anyone who reads this blog knows that I have not been a fan of Tommy the last few weeks and suffice it to say, Iâ€™ve said some less than kind wordsâ€¦well, I take them all back.

Donâ€™t get me wrong, even in parts of this episode, I was very frustrated with Tommy (â€œI wish you had died on the islandâ€ is never an acceptable thing to say to your one-time BFF. Ever!), but with his last dying breath, he reminded me why I at one time loved this character.

After saving Laurel, Tommy gets caught under the rubble as the Glades crumbles around him and Iâ€™ll admit, I never saw his death coming. Obviously being the finale, I anticipated one or more deaths, I just never expected it to be Tommy and I think thatâ€™s what made it all the more emotional.

That being said, I love that after admonishing and criticizing Oliver for weeks, Tommy went out doing the same thing that Oliver was on his way to do. But more than anything, those last few moments between Oliver and Tommy are what got me. Deep down, despite the animosity and unkind words, I always believed that Tommy and Oliver still cared for each other and Tommyâ€™ apology — â€œIâ€™m sorry, I was angry and I was jealous, I am my fatherâ€ — was the absolute best send-off. 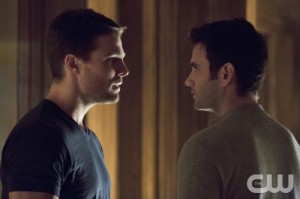 I absolutely LOVE that I was wrong and Tommy didnâ€™t turn in to a foe for the Arrowâ€¦.I feel that taking him the Harry Osborn-route wouldâ€™ve been clichÃ© and not true to the character. Iâ€™m not going to lie, as much as heâ€™s been annoying me lately, I hate to see Tommy go. I still held on to hopes of a reconciliation between he and Oliver, because I do truly enjoy their dynamic, but unfortunately that reconciliation came just a little too late.

It will be interesting to see how Tommyâ€™s death affects not only Oliver, but also Laurel. I imagine this canâ€™t be good for Oliver and Laurelâ€™s budding relationship, but I am hoping that they both use Tommyâ€™s death as a vehicle for inspiration rather than a reason to sink in to a dark place. Despite his sometimes party-boy ways, Tommy came a long way as a character in one season and he gave Oliver a sense of stability and friendship that cannot be overlooked. So hereâ€™s to Tommy Merlyn, we liked you once, we disliked you later, but in the end, your friendship to Ollie overcame all else and you went out with dignity and style. And if you ever want to return in flashbacks, we will happily welcome you (and actor Colin Donnell) back.

Moment of Goodness: Hannah and Brennan Bond on Bones

Glee’s Moment of Goodness: Kurtâ€™s â€œYou had me at Churchâ€ Hat

A Leverage Moment of Goodness: Alan Scott’s Video Goodbye to his Wife