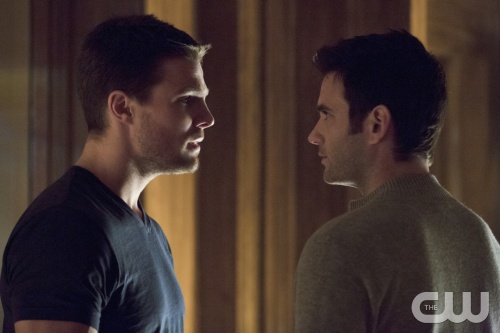 Choices, choices, choices. This week we saw a friendship, a relationship, an alliance and even a family crumble under a tough choice.

First, we saw Ollie leave Diggle high and dry when he chose to protect Laurel instead of playing sniper at the Deadshot dead-drop. Donâ€™t get me wrong, I donâ€™t blame Oliver for his choice, but would it have really killed him to call and give Diggle the headâ€™s up? I know, I know, itâ€™s a stressful, life-or-death situation, but it still seems like the least he could do. And clearly I wasnâ€™t the only one who felt this way, as Diggle later called Oliver out and hit a little below the belt.

Oliver: â€œDiggle, I made a choiceâ€
Diggle:Â  â€œI know, you chose Laurel. Itâ€™s always her and everybody else be damned.â€

These two have such high expectations for one another that I think itâ€™s fair to say that they almost hold each other to unreasonable standards. However, I think thatâ€™s why they are so great together.Â  They expect each other to be the best they can be and therefore they keep each other in check and on point. Unfortunately, in this case, Diggleâ€™s perspective was clearly colored by his personal vengeance and Oliverâ€™s decision (or lack of decision to call) was colored by his own personal panic and concern.

Later in the episode, we saw Oliver approach Diggle in an attempt to make amends and get them back on the same page. Instead, he was faced with a still-bitter Diggle who responded â€œOliver, weâ€™re not even in the same bookâ€ before walking out. Yes, it looks like this bromance may be overâ€¦but I donâ€™t think itâ€™ll last. These two are stronger together than they are apart and I think itâ€™s just a matter of time before they both realize how much they really do need each other.

The next choice we saw was compliments of Tommy, who I must admit is getting on my nerves. Now I have been a Tommy fan from day 1, but his anger and resentment towards Ollie is growing old. After all, Oliver saved his life, his fatherâ€™s life and his girlfriendâ€™s life multiple timesâ€¦that has to count for something! I can absolutely see that they are setting Tommy up to become Arrowâ€™s foe, but I feel that his behavior as a friend is getting a little ridiculous. I donâ€™t expect him to totally forget that Oliver hid a secret from him, but from the beginning, Iâ€™ve felt that their friendship was strong enough that something like this wouldnâ€™t threaten to destroy it. Okay, rant over. Back to Tommy.

After Oliver (once again) saves Tommy and Laurel from the ruthless assassin, Tommy whirls on Oliver for still having feelings for Laurel. Really?! Now?! This seems like a minor and irrelevant issue considering what just happened. But as a stand-up guy, Oliver admits his feelings but tells Tommy that he has nothing to worry about because he can never be with Laurel and she will never know his secret (loved the double meaning in this). However, this clearly isnâ€™t enough for bitter and angry Tommy, who rebukes:

â€œIt doesnâ€™t matter if she knows, I know. And I donâ€™t know how to be with Laurel knowing the entire time that if she ever found out who you really are, she would choose you.â€

Now, I canâ€™t blame Tommy for his feelings or tell him that they arenâ€™t valid, but the way he dealt with it seemed childish and again seems to be laying the groundwork for the resentment Tommy needs to become a personally invested adversary.

The final choice we saw, which I have yet to believe is as straightforward as it appears, is thanks to an island flashback. As Yao Fei stumbles in to the safe-house and takes Oliver, Shado and Slade hostage, it looks as though he has chosen to side with the island bad-guys rather than his daughter and one-time friend. Again, like I said, I think there is more to this than meets the eye for we have seen Yao Feiâ€™s supposed â€œloyaltyâ€ vacillate before and I would like to hope that he has a plan up his sleeve. Nevertheless, as he uttered to Oliver that his â€œtime on the island is at an endâ€, I couldnâ€™t help but get chills up my spine and wonder if he is envisioning Ollie sailing home across the ocean or sailing six feet under in to a grave.

Only three episodes left before the first season comes to an end, letâ€™s hope we get some answers! Arrow airs Wednesdays on the CW at 8/7c.

Dancing with the Stars: Season 16, Week 6