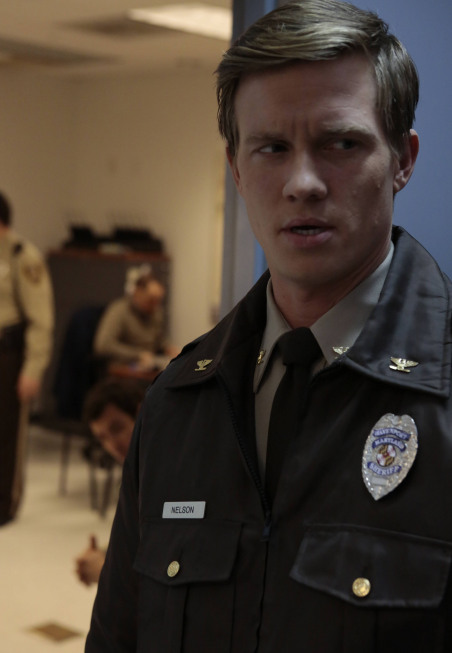 The Following “Havenport” was a phenomenal episode. And for the most part, I feel like everybody stepped up and delivered; however, there are three actors that I think deserve a little special attention this week. Our Gold Star Goodness shout out goes to:

First off, Roderick. Our experience with Roderick may have been short, but thanks to the stellar acting of Warren Kole (Common Law), it made a big impact. Donâ€™t get me wrong, I donâ€™t LIKE Roderick as a person and I am fully aware that he is completely unhinged, but the way this character was developed and brought to life had me in awe. In this episode in particular, we saw Roderick go completely off the deep end after Weston called him out at the station. This lead to an incredible confrontation with Joe, after which Roderick scooped up Joey and went AWOL. Thanks to a snafu at a local roadblock, the FBI caught up with Roderick. And it was those scenes in the interrogation room that I think should earn Warren Kole an Emmy. His smug, cool, maniacal confidence radiated off of him even as he sat chained to that table and the way he interacted with Ryan was nothing short of astounding. Call me crazy, but I almost even saw a little bit of Joe in him. To me itâ€™s clear that Roderick wants to be in charge and seeing him channel his inner-Joe only confirmed to me that he is also crazy enough to think he deserves it. Between the phone call to Joe and testosterone showdown with Weston, I truly believed in the brand of psycho that Kole was selling. And again when he took Ryan to the cabin in the woods to rescue Joey, I found myself questioning any and every glance, hint and intonation that he delivered. Rarely are characters so seamless and he did an exceptional job. While Iâ€™m bummed that this is likely the last weâ€™ll be seeing of Roderick, as he was gunned down by Joeâ€™s men in the episode, I feel like his presence was a necessary and fitting catalyst for both Joeâ€™s breakdown and the cultâ€™s eventual demise.

Speaking of Joe, he earns my second gold star of the week. Up to this point, Joe has been cool, calm, collected and always in control. Even at the beginning of the episode when Roderick busted in to break the bad news, Joe was upset but he still held it together. That is why his final phone call to Ryan had me so entranced. As he paced in front of the fireplace with his bandaged abdomen and wallowed about how their story would require a rewrite, I could hardly stand to blink. This really is ALL about the story for Joe. And Claire stabbing him did not fit in to his novel. He told Ryan that they needed a rewrite, but all would be okayâ€¦oh right, besides the fact that his ex-wife just manipulated him and stabbed him and now heâ€™s going to kill her! But donâ€™t worry, the book will be okay! This is true insight in to the mind of a psychopath and I love it. I donâ€™t think weâ€™ve ever seen Joe so frazzled and even through the phone, Ryan could sense the same thing. While I donâ€™t think that this will last for long (as Joe always seems to recover from any unexpected surprises quite quickly), I really feel like the writers were showing us something by allowing us to see that despite all his intellect and conviction, Joe is fallible. And since I gave tremendous credit to Kole earlier, I also have to acknowledge the truly creepy and consistent delivery that actor James Purefoy brings week in and week out to the character of Joe.

My final recognition of the week goes inevitably to Jacob. Weâ€™ve known from the beginning that Jacob is not as violently inclined as the other Followers and after meeting his mother, we see that itâ€™s just not in his nature. However, itâ€™s clear that Jacob is seeking the fatherly approval of Joe (since his relationship with his own father appears to have been strained) and in his own mind, will do anything to make Joe proud. Weâ€™ve seen him try to steel himself to this way of thinking, but one canâ€™t help but notice that itâ€™s a constant inward battle for him. This week, we saw Claire and then Ryan and then even Joey appeal to that vulnerability as they repeatedly attempted to convince him that Joey deserved better.Â  Watching him silently fight that internal struggle behind the barn as one tear rolled down his cheek, I couldnâ€™t help but feel that Jacob is a good guy who saw no other place to turn for the approval he so desperately sought. Now that heâ€™s back at the mansion without Joey, Iâ€™m fascinated to see how this all plays out. Especially now that his humanity has clearly broken through and heâ€™s starting to see how this all may end.

Only two episodes remain. The Following airs Mondays at 9/8c on FOX.

Everyone’s Got a Button to Push in Lucifer’s “Homewrecker”