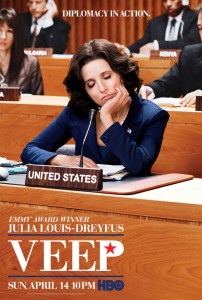 Veep kicks off its ten-episode season 2 premiere tonight. With midterm elections looming,Â Julia Louis-Dreyfus‘Â VPÂ Selina MeyerÂ is surprised to find herself scoring higher ratings in the popularity polls than the president. She hopes to take that information to not only boost her influence in the Oval Office, but also curry favor with POTUS himself. But as she well knows, even the most banal action can set up of a chain reactionÂ that has unexpected, far-reaching – and often disastrous – consequences.

Guest stars this season include:

Kevin Dunn‘s Ben, as the president’s chief of staff.

Tidbits on the first two episodes, “Midterms” and “Signals.”

Season 2 of Veep premieres tonight at 10/9c on HBO.