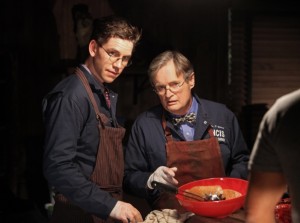 Wow, it seems like forever since weâ€™ve had an NCIS episode that featured Ducky (David McCallum) or Jimmy Palmer (Brian Dietzen).Â  I think the last time we had such an episode was in the season finale when Jimmy got married and Ducky had his heart attack.Â  Fortunately for us, we got a real treat in tonightâ€™s episode, with Ducky and Jimmy teaming up not just on a case, but to save each otherâ€™s lives.

The opening of the episode is actually pretty comical.Â  A man, appearing to have been in a fight, stumbles down the street in an upscale neighborhood, scavenges through the back of a plumberâ€™s truck, and downs a half bottle of drain cleaner. Eww! My first thought was the guy must be crazy, but of course, it turns to be a lot more to the story.Â  The victim was Navy Officer Gordon Roth, he had been fatally shot and beaten, and the only mystery was why he hurried his own death along by drinking the drain cleaner.

As Jimmy and Ducky begin transporting the body from Richmond, VA back to the lab, this is where the fun begins.Â  I laughed out loud when Jimmy and Ducky flipped a bony tip of a finger to determine who drives the van and was amused even more as they debated who got to choose the music on the radio.Â  But, the amusement was about to turn to real trouble when the van suddenly has a blowout, and a mysterious group of three people pull over and demand to see the body.Â  They are looking for something, which they do not find, and that means Ducky and Jimmy are now their hostages until they locate it.

They are taken to a remote cabin, where they are forced to perform an autopsy, looking for the missing item, which turns out to be a USB drive containing classified information.Â  Back at the NCIS lab, the rest of the team discovers that Gordon Roth isnâ€™t really Gordon Roth, but an imposter.Â  Heâ€™s been impersonating Officer Roth since he entered the Navy nearly 10 years ago, and has been systemically stealing and selling classified information ever since then.Â  To make matters worse, Roth had been banging his commanding officer to gain access to her passwords, and her angry husband is how he ended up shot and nearly beaten to death.

As Jimmy and Ducky perform the autopsy and try to figure a way out of their predicament, the next few scenes are absolutely fantastic and clearly shows the strong bond these two men have forged over the years.Â  For the die-hard NCIS fans, do you remember when Gerald was Duckyâ€™s assistant back in Season 2?Â  Even when Zivaâ€™s brother, Ari, held them both captive and Gerald was ultimately shot, the comradery between the two was not really evident at all.Â  Ducky and Gerald may have worked together, but the strong friendship that is apparent between Ducky and Jimmy just was not there.

As Ducky and Jimmy are performing an autopsy, they devise an ingenious plan of escaping their captors.Â  The first step is to drive them out of the room due to the stench, which was not very difficult.Â  Jimmy uses Rothâ€™s stomach acid to melt the locks on their leg irons, and Ducky uses a cigar and some gauge to rig a bomb in the methane-based wood-burning stove in the cabin.Â  They even go as far as making the captors believe that a key had been found inside of Roth, and Jimmy and Ducky does an extraordinary job fumbling around, playing the â€œdumbâ€ Medical Examiners, to convince them itâ€™s the real thing (even though the drain cleaner would have definitely dissolved the plastic on the key, dumb-ass kidnappers!).

Their plan does surprisingly work, they escape into the woods, and all they need now is to make it to the highway.Â  At first they are moving along at a good pace with Jimmy actually being unable to keep up with Ducky, but then, Ducky slips and sprangs his ankle.Â  Ducky demands that Jimmy leave him behind, but Jimmy says itâ€™s not an option:

As for leaving, you can go to hell â€“ Jimmy

This here is the difference between Duckyâ€™s relationship with Jimmy and that with his former assistant, Gerald.Â  When Ducky had been kidnapped by Ari, Gerald was released.Â  But, instead of trying to figure out a way to save Ducky himself, he left that part to NCIS.Â  Jimmy could have easily left Ducky here, but he didnâ€™t.Â  Instead, they come up with another option working as a team.Â  Ducky lures one of the kidnappers in by pretending to have lost Jimmy, and it ends with Jimmy coming out of the bushes acting like some crazy Ninja, shooting the captor to the ground.Â  I wonder how many viewers like myself were laughing hysterically and yelled, â€œYes!!â€ at the end of that scene.

All in all, this was a fabulous episode.Â  We got some wonderful character development with Ducky and Jimmy, as well as a fair share of comical moments between the two.Â  Heck, even the case of the fake Gordon Roth was interesting, and 9 times out of 10, the real case in an episode like this is usually irrelevant.Â  Kudos and plaudits to the writers of this episode!Â  Hopefully, weâ€™ll get more episodes like this in the future.

Â  Â  Â  Â Â We have something better than a weapon.Â  We have him (pointing to Rothâ€™s corpse) â€“ Ducky

NCIS airs on Tuesday nights at 8 p.m. EST on CBS.

Kristen vs. Brooke: Who Will Be the Next Top Chef?