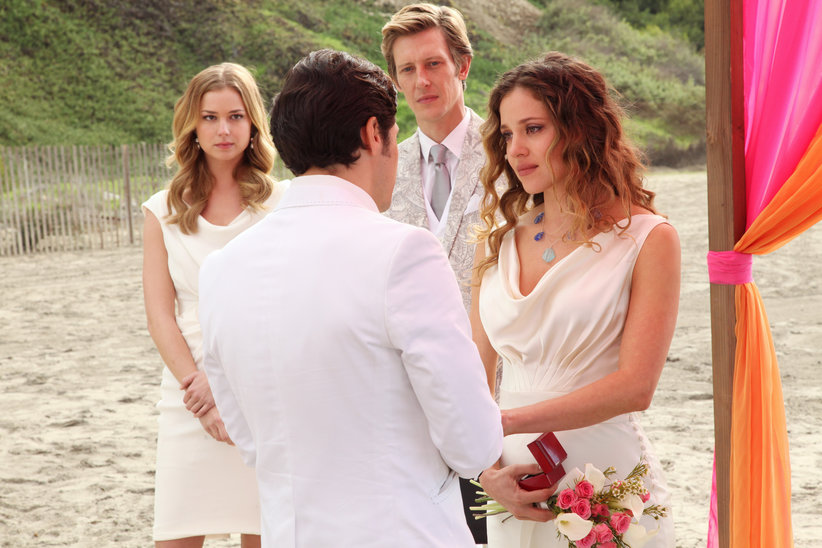 Sorry sorry sorry.Â  Iâ€™m late this week, because I got caught up in a really good book (yep, I read too) and then decided to try something new with the remote and discovered all kinds of new television programs to share with you.

When the first season ended, I vowed to stop watchingÂ Revenge, because where could this storyline go? But I got sucked in and Iâ€™ve continued tuning in — this weekâ€™s episode left me stunned.Â  I had no idea what was going to happen, but I didnâ€™t expect FauxManda to die! Yes, this weekâ€™s TV-Tacular moment was Amandaâ€™s death after Emily came to the rescue when the bad guy kidnapped Jack and Amanda.

I still donâ€™t know how long Emily can keep up her revenge scheme, but the surprise cast shake-up got my attention. UnlikeÂ Vampire Diaries, which was just boring this week.

On the latest season of ABC’s Greyâ€™s Anatomy, the doctors are circling the wagons to buy the hospital, which sounds like the worst idea ever in the real world, but itâ€™s a happy ending on television. Â I started watching Grey’s Anatomy the third season so I sat down and caught up with the first 2 seasons. This weekâ€™s TV-Tacular moment -Â Grey‘s-style – is that they used to spend a lot of time on treating patients in the beginning. Who knew?

Season 8 of Grey’s Anatomy airs Thursdays on ABC at 9/8c.

Wasnâ€™t really a hot episode until the political dinner when Mr. President saw his former flame flirting on her phone. I donâ€™t want her, but I donâ€™t want anyone else to have her?Â  And the Cyrus v Mellie battle continues, this round went to Cyrus as he set up Mellie to look like an idiot in front of her husband.Â  This week had 2 very TV-Tacular moments, but Scandal never fails to amaze me, so here goes.

1.Â  Captain Jake Ballard is old friends with the President and has been tasked with keeping an eye on Olivia. So why is he dating her?

2.Â  The mole is the guy the President tasked with finding the mole. Now that’s a surprise.

This weekâ€™s TV-Tacular moment is simply that Emily Owens MD was canceled!Â  I love this show.Â  Bummer, because Emily had just started dating Micah and Will was getting jealous; he had just broken up with Cassandra (or she broke up with him). Well, now itâ€™s over.

The next shows on my list are FX’sÂ The Americans (love Keri Russell), USA Network’sÂ Suits (which I realized just ended its latest season), and ABC’sÂ Zero Hour (I remember Jacinda Barrett from Real World London).

Gilmore Girls: A Year in the Life

Appearances Can Be Deceiving, The Following “Flesh & Blood”