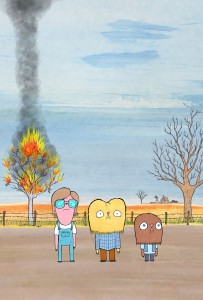 IFC has a new animated series that’s premiering tomorrow night. It’s called Out There and it looks like quirky fun. Who can’t relate to a kid who exhibits socially awkward tendencies? Here’s what you need to know:

About the Show:Â Out There is created, written by and executive produced byÂ Ryan Quincy, two-time Emmy-winning animation director and producer ofÂ South Park. The ten-episode series chronicles the socially awkward Chad Stevens and his best friend, Chris Novak. Living in the small town of Holford in the middle of nowhere, the boys wander the surreal, bleak landscape waiting out their last few years of high school and discovering that growing up is weird to do. Puberty, first loves, social ostracism, conservative parents, single moms and their disastrous boyfriend choices — â€œOut Thereâ€ confronts these perils of youth and explores that terrifying limbo between childhood and adulthood when fragile young personalities form and deform. Relive the agony and ecstasy of those special times as Chad and Chris try to navigate lifeâ€¦ out there.

Adding to the show’s cool factor are the guest star voices lining up to be a part of this show. They include Ellen Page, Jason Schwartzman, Sarah Silverman, Selma Blair, Stephen Root, Jemaine Clement, Nick Offerman and Christian Slater.

What They Said: Favorite Quotes From Archer "Once Bitten"

Arrow Conversations: Who Can You Trust?