In my preview for “Target” I said this about Rick Castle’s quest to find his kidnapped daughter, Alexis:

“Get ready for a Rick Castle youâ€™ve never seen before. Heâ€™s scared for his daughter. And at one point in the episode, heâ€™s scary in the name of his daughter. Havenâ€™t seen Nathan Fillion like that since he played Reverend Caleb in Buffy the Vampire Slayer. Even though Castleâ€™s situation is every parentâ€™s nightmare, itâ€™s good to see Fillion stretch his acting muscles in this way. He does a damn good job.”

The scene I was talking about was when Beckett and co. tracked down the driver of the van used in the kidnapping. Beckett secured the idiot who was all machismo and douchery. He wasn’t talking. Scratch that. The guy didn’t have a thing to say…until Castle asked Beckett to give him some quality alone time with the criminal.

And Beckett did just that. I was kind of shocked she left him alone in that room with the driver. Castle walked in and then proceeded to shut the door.

Douglas: “I just said I don’t want to talk. You can’t question me. I have rights. I’m not gonna say anything without a lawyer”
Castle: “I’m not a cop.”
Douglas: “Then who are you?”
Castle: “Do you remember the girl with the red hair? I’m her father. Please know I will do whatever it takes to get her back. Those police outside are my friends. My daughter’s friends too. So it’s just you and me.”
Douglas: “If you touch me, I’ll press charges.”
Castle: “I don’t care. Where are they?”
Douglas: “I’m just the driver I…I don’t know anything.”
Castle: “You know Henson ditched the van for the black Yukon. So where did they go? Where did he take the girls? I won’t ask you again, where did he take the girls?”

At that point, Castle closes his eyes. Not sure if it was to brace himself for what he was about to do or if it was a tactic he used to to try to rein himself in. If it was the latter then it didn’t work. Suddenly, the action cut to outside the room where Beckett was standing. And then we heard the driver start screaming. This left me wondering what the hell Castle did to that man.

Later, Beckett questioned her significant other about what he did to the driver. Castle said he appealed to the guy’s humanity. Wow. As Rick Castle, Nathan was allowed to run the gamut of emotions. But it was this scary side of the novelist that I loved seeing the most.

Castle‘s usually a lighter show. A lot of comedy mixed in with a murder mystery and a smidgen of emotional dramatics. That kind of thing is usually saved for Beckett and her long (long) journey to bring her mother’s killer to justice. It was satisfying to finally get to see Castle handle the emotional heavy lifting.

Castle may seem like he’s a light-hearted kind of guy. But he loves hard — as much as he used to play hard. So when someone comes along that threatens the people that he loves, he really will do whatever it takes to protect them. To keep them from harm. This scary side of Castle lays dormant but I feel we’ve always known that he’s capable of doing what he did to that driver in that room. The fact that we didn’t see actually see the act, makes it that much more powerful.

Kudos to Nathan Fillion for his performance in “Target” and I cannot wait until we see the second of this two-parter. Castle “Hunt” airs Monday, February 25 @ 10/9c. 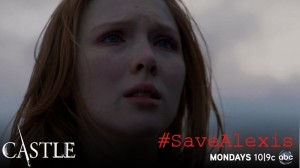 The Following "The Siege"

What We Learned from Scandal “Nobody Likes Babies”

Dancing with the Stars: Season 16, Week 2