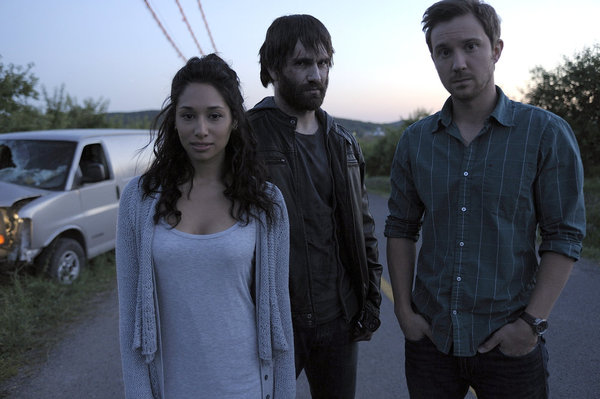 [WARNING: Spoilers for Being Human season 3]

The vampire, werewolf and ghost roomies are finally back. Season 3 of Syfy’s Being HumanÂ returns tonight in what has instantly become a major destination for sci-fi fans. Syfy’s Powerful Mondays feature a three-hour block of original scripted programming. It all kick offs at 8/7c with a new series we love calledÂ Continuum; then it’sÂ Being Human at 9/8c; and Lost GirlÂ at 10/9c.

The new season of Being Human picks up 15 months after the events of last season’s riveting finale which ended with Aidan buried alive as punishment from vampire leader Mother, Sally lost in a state of limbo, and Josh’s plot to kill Ray, his werewolf “maker,” endangering Nora instead.

We screened the premiere at the show’s recent Paley panel.Â You’re absolutely going to love “It’s a Shame about Ray.” It’s an exciting, action-packed episode. 1. There’s a lot of Nora and Josh goodness as they try to figure out where their friends are. You’ll be surprised at the lengths they will go to attempt to bring them back. 2. There’s a returning guest star that’s so good to see. Love how he or she is incorporated into the episode. 3. We find out how Aidan gets out of his predicament. We don’t want to say much more than things don’t get much easier for him once he does get out.

Some great news about season 3: 1. Kristen Hager is on board as a series regular. How exciting is that? We love her as Nora and particularly love the Nora/Josh dynamic. 2. The awesome Amy Aquino guest stars asÂ Donna, a witch whose supernatural spells are sought out to help find Sally. 3. If you’re still sad that Xander Berkeley was killed off the CW’s Nikita, well console yourself with the fact that he’ll be doing a guest star stint on Being Human. He’ll playÂ Liam, father of purebred werewolf twins who is intent on locating his missing children. So he’ll definitely pose some trouble for Josh, right? Berekely almost always plays a troublemaker.

Being Human “It’s a Shame about Ray” premieres tonight at 9/8c. Make sure to check out the photos from the episode (above) and a couple of sneak peeks (below) that are sure to get you excited for the season 3 premiere.

The first four minutes of “It’s a Shame about Ray”